"Jess Yeomans, a goat farmer from Llanvetherine near Abergavenny in Monmouthshire and Harper Adams alumna, has been announced as the NFU Cymru/NFU Mutual Wales Woman Farmer of the Year at the Royal Welsh Show." 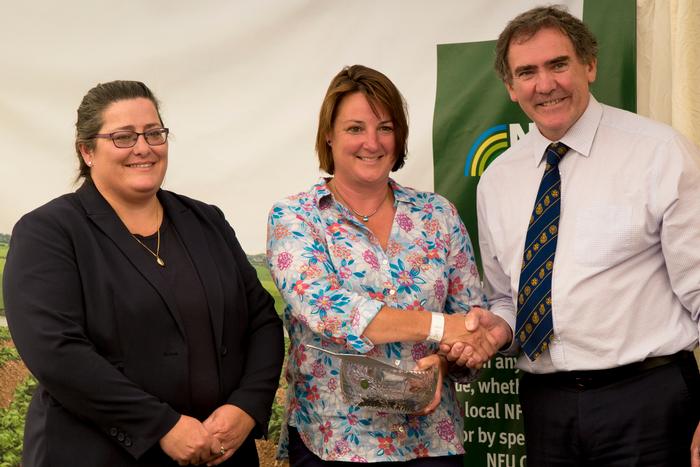 Jess Yeomans, a goat farmer from Llanvetherine near Abergavenny in Monmouthshire and Harper Adams alumna, has been announced as the NFU Cymru/NFU Mutual Wales Woman Farmer of the Year at the Royal Welsh Show.

Together with her husband, Gary, Jess runs a successful business from the family farm, supplying goat milk from their herd of 900 Saanen and Toggenburg cross goats to Abergavenny Fine Foods for use in goat’s cheese. They also have a pedigree herd of 20 Welsh Black suckler cows.

Jess graduated from Harper Adams in 1992 from the AMBA course (agri-business, marketing and business administration) after completing three years at the institution. She said: “I had a brilliant three years at Harper Adams, thoroughly enjoyed it. I made some great friends and still keep in touch with them all. It was a great experience, and definitely set me up to living life and working in agriculture.”

Jess now plays an active role in hosting a variety of public events at the farm, varying from farm groups to school trips and major retailer representatives.

Away from the home farm, Jess works as a farm assurance assessor, promoting quality standards on farms across South East Wales. Jess sits on her local church parish council and is also a member of the local hunt and pony club, as well as supporting a number of local children’s sports clubs.

Competition judge NFU Cymru Deputy President Aled Jones, said: “It gives me great pleasure to announce Jess as the winner of the 2018 Wales Woman Farmer of the Year Award.

“From visiting the farm it was clear that Jess has played an active role in the development of the business from its inception 16 years ago and she continues to do so today whilst juggling her role as a mother and an active member of the local community.

“The farm buildings where the goats were housed were in immaculate condition and the farming operation really was of the highest quality; something that is recognised by the fact that the farm often receives visitors who come to see the business as an example of best practice. Jess’ win in this competition is a win for all those women who are shaping their farming businesses while also juggling important roles at home and in their communities.”

Fellow judge and representative of sponsors NFU Mutual, Maria Norejko, an NFU Cymru/NFU Mutual Group Secretary in Llandovery, added: “I was thrilled to be asked to judge this competition along with our partners at NFU Cymru.

“I would like to place on the record how impressed I was with the standard of all the farms we visited as part of the judging process; we saw some fantastic women and their businesses across Wales, all of whom are demonstrating that they are leaders in this industry.

“The calibre of candidates this year was exceptionally high, but I would like to congratulate Jess on coming top of the pile. Her intuition, hard work ethic and passion for the industry make her a fantastic ambassador for female farmers all over Wales.”

Jess was presented with a Welsh crystal engraved bowl and £500 prize money to mark her achievement.

The award, now in its 22nd year, seeks to champion the contribution that women make to the agricultural industry and to raise the profile of women in farming.