Graduation 2018: Student project looks at the public’s attitude towards insects as a food source

"I did this project because in 2050 the population is going to be nine billion people, so something needs to change so that we can all eat. Insects can feed on anything, there is huge scope for feeding our food waste to insects which in turn will become an important source of animal feed." 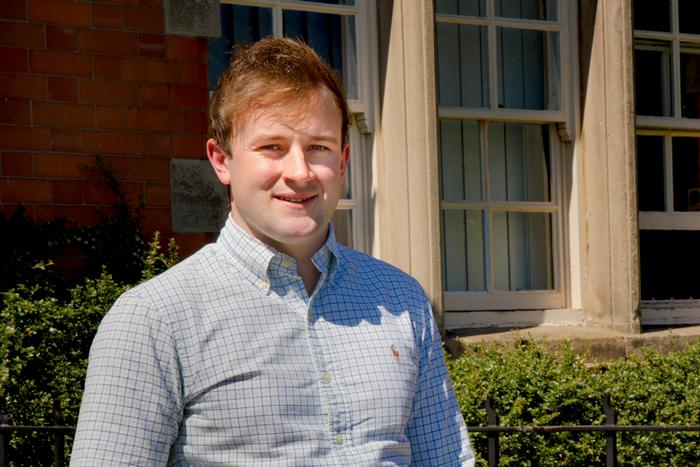 Tom Evans, 22, has looked into the UK consumers’ perception of insect protein as an animal feed and human food source.

The BSc (Hons) Agri-business student from Rugby, Warwickshire, said: “The idea to look at insects came from something that I saw on TV around three or four years ago where insects were being seen as a possible future solution to food shortages, and I’ve been keeping an eye on it ever since.

“Over the years it’s been appearing a bit more on the internet, even some things on Facebook.

“Last year I went to a conference in Berlin called INSECTA and it was about insect production and using insects for animal food and for human consumption.

“I’d previously only heard about using it for human consumption; I hadn’t realised that it could be used for animal feed as well, which was heavily emphasised at the conference. So when I came home, I knew that I had to do my dissertation and I knew that I was going to do it on insects because I found them interesting.

“I created and shared a questionnaire with about 30 questions, from demographic to a food neophobia score which rated each participants’ aversion to eating new things, thus measuring how scared consumers are about new foods.

“I’d have liked to do a sensory panel but I didn’t have enough time. I worked with a sample of 427 respondents for my survey and, despite some mixed reviews, overall the perception was positive.

“People don’t necessarily know the diet that the animals have consumed while they were alive. When I asked how they felt about eating meat that had been fed an insect- based diet, the respondents were mostly fine with it.

“Quite interestingly, when the respondents expressed being fine with consuming animal products who had been fed insects, many weren’t aware of what it’d be otherwise.

“I think insects definitely provide a future solution to traditional protein feed sources; such as soya. In the fish industry, for example, most of the protein in the feed is from soya or fishmeal. Fishmeal isn’t sustainable as it’s derived from other fish and soya is produced in tropical countries around the world, with some detrimental environmental impact. So I believe insects will be used for fish food, possibly also for poultry and pigs.

“The feedback in relation to food consumption was that most people wouldn’t eat insects if they were whole, if they are visible, which is understandable.

“My sample indicated there was mixed acceptance for insect protein in foods. This is when insects are milled and mixed into a sort of flour that can be used as an ingredient in other products, such as flapjacks. The majority of participants were willing to include them in their diet if they were deemed better for the environment; more sustainable, less greenhouse emission, smaller carbon footprint, as long as they couldn’t see the insect parts in a product. But the sample studies also indicated they would never replace insects for meat.

"I did this project because in 2050 the population is going to be nine billion people, so something needs to change so that we can all eat. Insects can feed on anything, there is huge scope for feeding our food waste to insects which in turn will become an important source of animal feed.

“Because it’s a relatively new topic, there has been some research in other European countries to see the perception of people including insects in their diet, but there’s not been a lot done in the UK. In Germany there are companies producing insect burgers, in Holland there are restaurants offering insect burgers on their menus and in Switzerland you can already buy insect burgers from the supermarket! This not to mention many other food products which are available in cafés and specialist food retailers.

“I’d like to thank Ourania Tremma for all her support with my statistical analysis and Luís de Aguiar for being my supervisor. Luís submitted part of my results to the third International Conference of Agriculture and Food in an Urbanising Society (III AgUrb) which organised by the Food and Agriculture Organisation of the United Nations (FAO).”