“This is a great achievement for Harper Adams University and for us as a team of early career academics and engineers.” 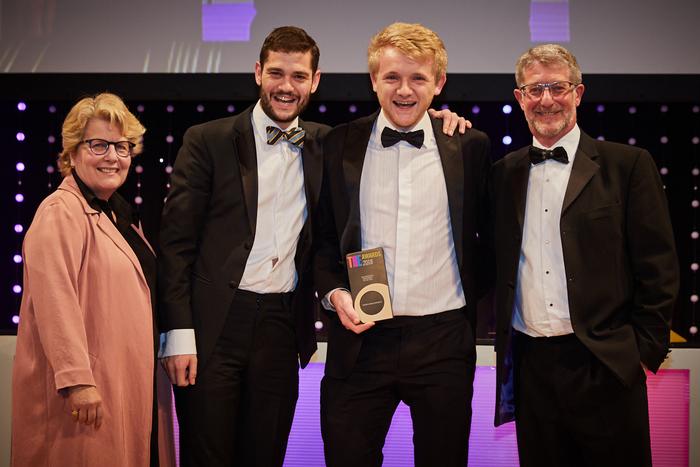 Hands Free Hectare (HFHa), a project ran by Harper Adams University and Precision Decisions, was named the Technological Innovation of the Year at the Times Higher Education (THE) Awards 2018 last night.

The awards, now in their 14th year, are widely referred to as the ‘Oscars of higher education’ and shine a spotlight on the exceptional achievements of individuals, teams and institutions in the sector.

The HFHa is a world-first project which set out to drill, tend and harvest a crop without operators on the machines and agronomists in the field. It has completed two successful years after harvesting its second cereal crop in August of this year.

The project aimed to move on discussion about precision farming, soil compaction and the future exciting innovative careers in agriculture.

It attracted interest from around the globe, including coverage in The Times and on the BBC’s One Show and the New Yorker website. It’s been referred to by government officials and the project team have reported on the system at conferences as far afield as Australia and India.

In addition, the project proposal was presented as part of researchers’ evidence to a House of Lords committee that autonomous vehicles could help to make crop production systems more efficient and sustainable.

On receiving the award, project co-founder and senior agricultural engineering lecturer Kit Franklin said: “I was shocked when we were announced as the winners for this award.

“We were up against much larger universities that had worked on some very impressive projects.

“This is a great achievement for Harper Adams University and for us as a team of early career academics and engineers.”

The judges of the award said: “The Hands Free Hectare represented a step change in agricultural practice that demonstrated how technology could be used to benefit humankind.

“It united established technical concepts for a successful pilot of robotic agriculture. The panel was impressed by the application and by its potential global impact.”

On the importance of the THE Awards, John Gill, THE editor said: “At a time when universities face challenges and headwinds, when politics and social attitudes can seem to call into question many of the things that they stand for and hold dear, it is particularly important to champion the values, creativity and dedication of those who live and breathe higher education.

“As ever, our shortlists represent the best of the best, but our judges also reported that this year’s entries were the strongest that they could remember, so all those honoured should be incredibly proud. It's THE's great honour to help celebrate their success.”

The awards were held at the Grosvenor House Hotel and were hosted by comedian and presenter Sandi Toksvig.

The awards followed the inaugural THE Live, a special event that brought nominees together to share their projects with fellow competitors and other representatives from the sector. Martin Abell, mechatronics researcher for Precision Decisions, represented the team.