"Working for Dalcour gives me more drive to be here at Harper to work. I’m being paid to be here and I need to get on with it." 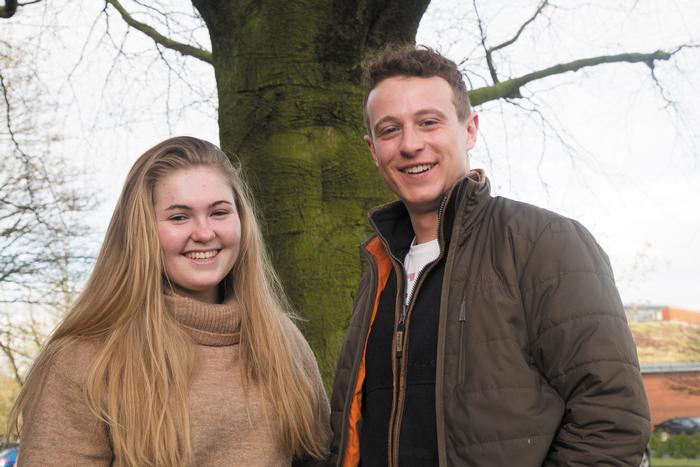 Joe and Tia’s routes to becoming degree apprentices were very different. Tia, 19, from Cirencester was fresh out of Sixth Form and almost ready to head to university on a standard, full-time degree programme. Joe, 23, from Much Wenlock, had already completed a degree at Harper Adams, but wanted to change direction.

Joe and Tia were hired last summer by rural chartered surveying firm, Dalcour MacLaren, as degree apprentices. Joe is based at the Crewe office and Tia at Cirencester, but they come to Harper Adams for a week at a time, eight times a year to carry out degree-level studies.

After five years they will qualify with not just an honours degree, but also with the Royal Institution of Chartered Surveyors (RICS) Assessment of Professional Competence (APC) which will allow them to practice as chartered surveyors. In the meantime, they are living at home, studying on block release and, importantly, earning a salary and valuable practical experience in their chosen profession.

“Moving onto the apprenticeship was a last minute decision. I had actually applied to go and do a fashion degree in London. But I saw the job at Dalcour MacLaren, applied on the off chance and was offered the position. I’m from a farming background so I wanted to do something land-based but not agriculture so it was the next path and it was quite interesting so I thought I’d give it a go.

“Being able to earn money while I was training was a deciding factor, but I also know that I learn better through doing than by being in a classroom.

“The structure of the course also suits me better – I quickly discovered that after my first study week at Harper. I was ready to go home at the end of it”

“I finished a degree from Harper in Countryside Management last summer, but part way through that I realised the course I was doing wasn’t really for me and I wanted to become a chartered surveyor.

“I’ve grown up in the countryside in Shropshire. My dad has a farm in Worcestershire so I’ve always been around that environment. Chartered surveyors are the experts in the countryside so they need to know a little bit about everything to give advice and that ticked all boxes for me.

“To become a chartered surveyor you’ve got to do a RICS accredited degree. I could have topped up and done a master’s degree but I really wanted to get out of full time education. I was itching to get into work and earn some money so when this apprenticeship came along, it seemed right.

“But still I didn’t really realise the full extent of what they do until I was in the job. There’s a lot more to it!

Tia says: “I’m lucky in that my manager has got quite a few projects to cover so I get to do quite a lot of talking to landowners. It’s an area where I need to build my confidence and the company is pushing me but in a supportive way.

We have placements students from Harper in our office and graduate trainees, so I can join in with them. Sometimes I have done something as a trainee at work before I learn about it at Harper, which is a different way to learn, and helps me!,” she added.

“Dalcour has got quite a young team,” say Joe. “They’re very forward thinking and I get to shadow other surveyors. It’s just a great company to work for.

And when you are on a study week? It is strange not being a full-time student?

“I think if I hadn’t done a full time degree initially, then I would have felt a bit left out because there’s something about being at Harper full time,” says Joe. “It’s the atmosphere and the whole experience.

“But there are other plus sides to doing an apprenticeship: the financial situation, not being in debt by the end of it and just working and learning at the same time. It’s a brilliant way to do it as you’ve got lots of expertise from Harper as well as the company you’re working for.”

Tia adds: “Joe knew people from before, but I’ve become friends with some of the full time students. But I do think that working for Dalcour gives me more drive to be here at Harper to work. I’m being paid to be here and I need to get on with it.”

What are your ambitions?

Tia: “It’s early days, so for now my aim is to complete my apprenticeship and be RICS Accredited. And CAAV (Central Association of Agricultural Valuers) accredited too.

Joe: To become RICS accredited. And during the five years at Dalcour I’d like to move around departments. I’m currently in the power sector so there’s lots of renewable energy projects and water projects. I’d quite like to get into the different property sectors and environmental consultancy.

What’s your message to anyone considering the Apprenticeship route?

Tia: “It’s something that would work really well for some people and not so much for others. So have a good think about whether it’s right for you and if you think it is, get on and do it!”

Dalcour MacLaren is a firm of chartered surveyors acting exclusively for the utility and infrastructure sector. Upon deciding to train apprentices in partnership with Harper Adams, they advertised their job vacancies on the National Apprenticeships Service, enabling them to pick the best talent from across the country.

The Harper Adams University Rural Chartered Surveyor Degree Apprenticeship is in its first year and is one of four apprenticeship programmes currently available at the university, with more in the pipeline. Harper.ac.uk/apprentice