“The fact that these awards are based on the views of our students makes this successful outcome especially welcome, and we are grateful for their positive feedback.” 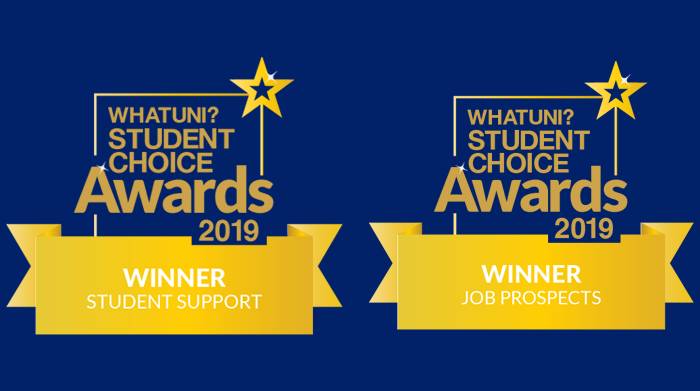 Harper Adams University continued its dominance in the Job Prospects and Student Support categories at the Whatuni Student Choice Awards (WUSCAs) which were held in London last night (25 April).

The awards are voted for by students; creating the only awards scheme based entirely on the opinions of those attending higher education institutions across the UK.

Harper Adams has now taken the Student Support title five years running; making it the only university to have won the award since it was launched.

It was also the fourth consecutive year that the University has been rated top for job prospects; highlighting the strong links it has cultivated between academia and industry.

Vice Chancellor, Dr David Llewellyn, said: “We were delighted to have, once again, performed so well in the Whatuni Student Choice Awards.

“We work hard to ensure that our students can get the most out of their time in higher education, providing a vibrant academic community that supports our students and helps prepare them for life beyond University.

“The fact that these awards are based on the views of our students makes this successful outcome especially welcome, and we are grateful for their positive feedback.”

Harper Adams also finished in the top ten for four other categories: Course and Lecturers (second place), Giving Back (fourth), University of the Year (fifth) and University Facilities (sixth).

According to the Whatuni league tables, UK students have said say they are happier with university life than they were last year. This year, overall satisfaction among students was 4.04/5 (or 80.8 per cent) among the 41,000+ students who participated in the annual review of 160 UK institutions.

Martha Longdon, Student Experience Board Member for the Office for Students and Whatuni Student Advisory Board Member, said: “Reviews and comments are vital to improving the student experience and provide an invaluable narrative of university life by allowing students to feedback on the issues they care most about.

“As students are increasingly seen as partners and co-creators in their education, this method allows them not only to offer detailed praise and concerns, but also the opportunity to suggest creative and innovative solutions which institutions may not have considered.”