“Henry has played a key role in our work in recent times, but this award also acknowledges his contribution to estates and facilities management within the higher education sector throughout his career." 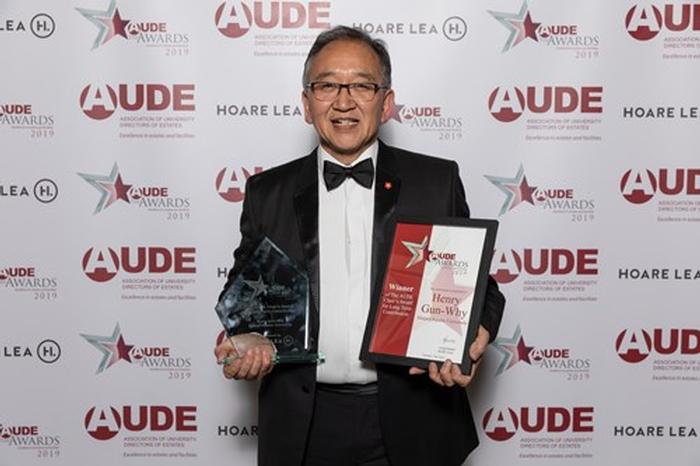 Congratulations are due to the Harper Adams University’s Estates and Facilities Consultant, Henry Gun-Why, who was announced winner of the Long Term Contribution Award at the Association of University Directors of Estates (AUDE) Awards on Tuesday 16 April.

Henry succeeded against the strong shortlist, which was comprised of directors from the sector. He was presented with the prize at a black-tie gala dinner at Lancaster University, which recognised the achievements of estates and facilities managers in Higher Education. The awards recognise professionalism, efficiency and effectiveness in supporting the mission of institutions. For Henry’s award, in particular, the focus was on long-term impact in the sector.

Before his role with Harper Adams, Henry held senior positions in estates management for the best part of two decades, having previously been Head of Design at the University of Liverpool, Head of Estates and Operations at the Science and Technology Facilities Council (STFC) and Director of Estates and Facilities at the University of Wolverhampton. In addition, he has served on the Executive Boards of AUDE as West Midlands Chair, Chair of AUDE Learning and Development and also as Chair of the AUE.

The awards event, which covered five categories, took place as part of the AUDE National Conference, which aimed to share best practise in the sector. This year the conference theme was ‘Mastering the Storm: Challenging Thinking for Challenging Times’.

Clearly, the Harper Adams estate is in an extremely safe pair of hands.

Commenting on Henry’s success, Vice Chancellor, Dr David Llewellyn, said: “This is a tremendous outcome for Henry and the University.

“Henry has played a key role in our work in recent times, but this award also acknowledges his contribution to estates and facilities management within the higher education sector throughout his career.

“We are thrilled for Henry that his professional colleagues within the sector have given him this well-deserved recognition.”