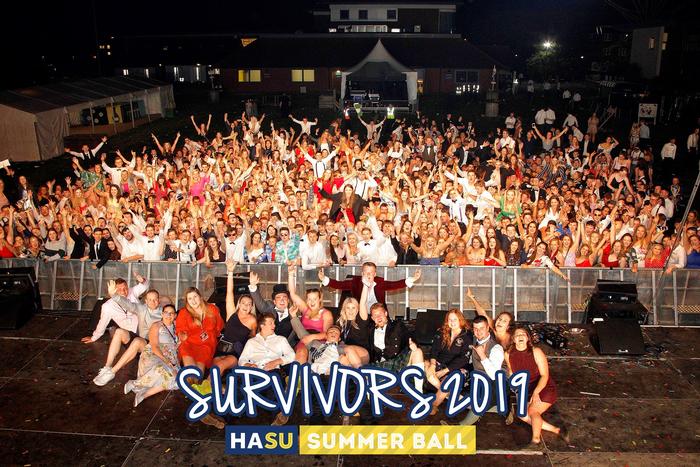 Survivors' photo - those who made it until 4am

The 2019 Summer Ball was held on Saturday, bringing students from all years together for a thrilling 12-hour event.

There were more than 2,000 students at the Ball, which ran from 4pm until 4am, featuring entertainment and live music throughout, with a theme of ‘At the Races’. Fuse ODG, Sigala and Jaguar Skills were among the acts on show.

A range of other musicians and tribute acts filled up the remainder of the line-up; with ‘Breminem’ closing the show.

The final years also sat together earlier in the afternoon for a three-course meal before the celebrations began. The special guest for the dinner was legendary ski-jumper Eddie the Eagle; who gave the after-dinner speech and had photos with a number of the final year students.

Alastair Burr, Director of the Students' Union, said: “It went really, really well. It was amazing. It was my first Summer Ball at Harper so I hadn’t seen it before and was unsure how it was going to go. But it was really good. We’ve had a lot of positive feedback from the students and the local community and we’re really looking forward to planning the next one.”

After many hours of partying, the traditional last survivors' photo was taken to show those who were still going come 4am; including a few that’d been there for the final years’ VIP dinner!

Alastair added: “It was great seeing all the final years get together to have their final meal and party. I was quite surprised to see some of them at 4am. Seeing them enjoy their night was probably my favourite thing about the event.”