“A final highlight in completing my studies is to have received my results and this prize. The hard work, determination and many, many, late nights have paid off.” 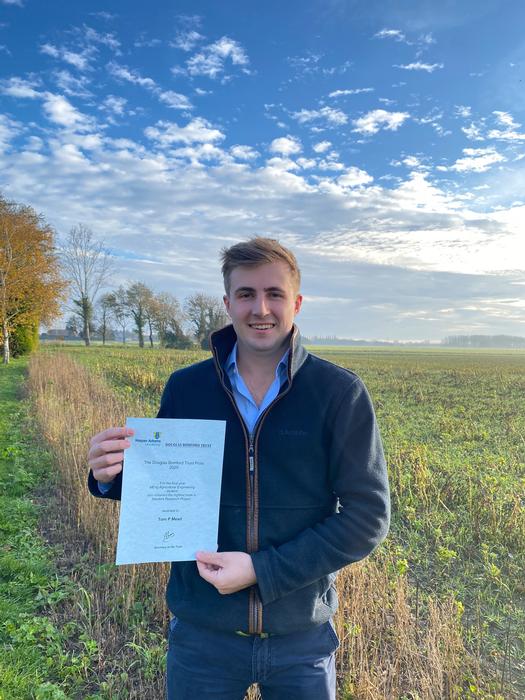 Tom Mead, 24, has been named this year’s winner of the Douglas Bomford Trust Prize.

The MEng Agricultural Engineering graduate from Cambridge was selected to receive the award for obtaining the highest mark in his cohort for his dissertation thesis.

Speaking about his Honours Research Project, Tom said: “The title of my research project was, ‘An investigation in the feasibility of NRTK being adopted for machine control within a sports stadium environment’.

“It looked into the use of Network Real Time Kinematic (NRTK) which is a Global Navigation Satellite System (GNSS) correction signal capable of providing sub 2.5cm accuracy.

“Already used in construction, surveying and the agricultural industry, I set out to prove whether it could be used within a stadium environment to control machines in a similar manner to machines in agriculture. This could lead onto the control and monitoring of fully autonomous machines.

“The investigation looked at the effect of the obstructions which reduce the visibility satellites from within the main structure, and how this and the orientation of the stadium may affect the performance of the NRTK correction.

“The arrival of Covid-19 prompted a change of plan and meant my data collection was to be simulated - bringing with it its own set of challenges. The result proved to be more beneficial than the original test plan was to be, with a total of 1875 hours of simulations.”

Over the five years that Tom studied at Harper Adams, he has channelled his lifelong passion for agriculture and innovation into an enthusiastic approach to developing his knowledge. Tom commented: “A final highlight in completing my studies is to have received my results and this prize. The hard work, determination and many, many, late nights have paid off.”

As a result of his work, Tom has gained a graduate role with RTKFnet as a Sales Engineer.

Outside of his studies, Tom actively contributed to student life through his work as the chairman for the Harper Hockey Club and sitting on the board of trustees for the Student’s Union. Additionally, Tom joined as a member of the IAgrE with ambitions to introduce his own projects in the future.