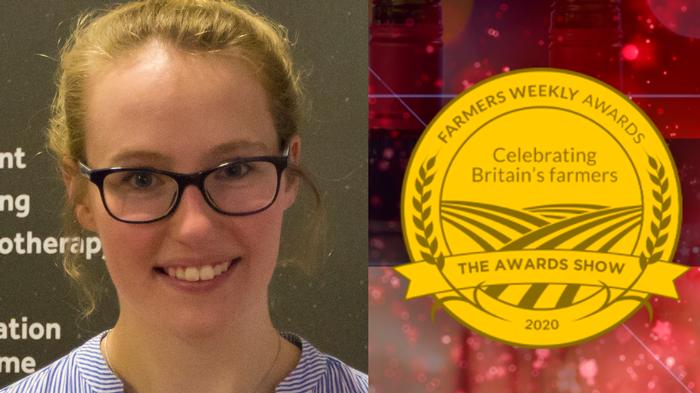 The announcement came on the first night of online awards shows all week from Farmers Weekly. Viewers were told: “Grace wowed the judges with her determined focus on becoming an independent herbage adviser and her fearless approach to getting stuck in whatever the job." The unstoppable Grace completed her FACTS qualification shortly after graduating as part of the FACTS & BASIS route offered by Harper & aims to complete her BASIS qualification in 2021.

BSc (Hons) Agriculture with Crop Management graduate Grace, 23, from East Stratton, Winchester, Hampshire, said she had had tremendous support from Harper Adams University and from her employer Germinal GB, for whom she is a Product Development and Seed Production Officer.

Grace said: “I am extremely shocked and humbled to have been awarded such a prestigious award within the agricultural sector. Not coming from a family farm background myself, anything I have achieved is as a direct result of those who have inspired me and given me a leg up on my way.

“My father always advocated a lesson that I live by, that you are never done learning; while David Janaway of Tile Barn Farm allowed me to turn my hand to anything, no matter how many times I was unsuccessful, and his work ethic continues to inspire me to do better every day. I hope this award is just a first step in a long career of working hard and learning every day.”

Announcing Grace as the winner, Emma Northam, for Farmers Weekly, writes: “Spend five minutes with Grace Welling, and you quickly glean she’s not someone who likes to sit still. It’s a trait that stands her in good stead for a career in agriculture, especially because she did not grow up on a farm… A scientist at heart, Grace takes a measured and thoughtful approach to whatever she does and likes to be in possession of all the relevant facts and information.

“…She recognises the need for a new breed of adviser who is proactive, not reactive, and places an emphasis on cultural rather than chemical controls.”

Independent judge Jack Hopkins, Farm Manager, Lower Hope Farms said: “Grace really stands out both academically and practically. Her determination to work hard, do well and succeed was really highlighted by her lecturer. She has a clear passion for agronomy and a great understanding of a broad range of key industry issues.”

Read the full profile on Grace on the Farmers Weekly website

Dr Russell Readman, who manages the Agricultural courses at Harper Adams, said: “Grace is an outstanding example of the type of graduate we seek to develop at Harper Adams: hard-working, forward-looking and an excellent ambassador for the industry. A real credit to herself and to Harper and a very well deserved win.”

Dr Readman added that he was delighted both the Farmers Weekly and the British Farming Awards Agricultural Students of the Year 2020 were Harper Adams Agriculture graduates.