Lockdown separation anxiety? Future veterinary nurse focuses on the impact of C19 on dogs and owners.

“I saw a lot of owners complain about their animals’ destructive behaviours but instead of understanding, they became frustrated and sometimes thought it was a physical disease" 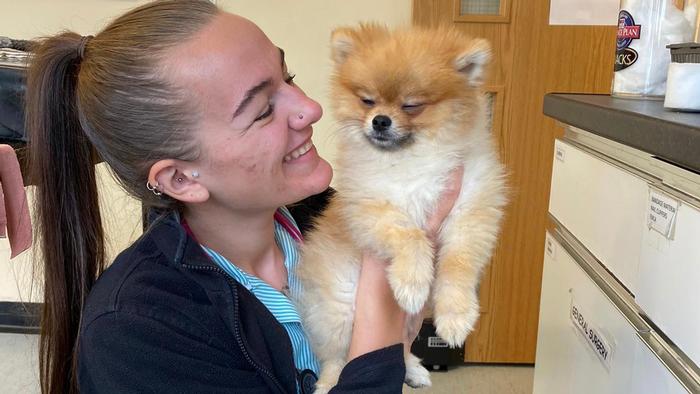 A student at Harper Adams University is seeking to explore dog owners’ awareness of separation anxiety and how changes in routine can impact on our canine companions.

Hannah Beard, 22, a final year BSc (Hons) Veterinary Nursing with Small Animal Rehabilitation student, is working on an honours research project entitled “An investigation into if routine changes in a home based environment causes separation disorders in canine pets and owner awareness of the condition.”

Last year, during her work placement, Hannah saw first-hand the consequences of separation anxiety and how it can affect a dog’s behaviour.

“I saw a lot of owners complain about their animals’ destructive behaviours but instead of understanding, they became frustrated and sometimes thought it was a physical disease rather than a behavioural, treatable condition,” she explained. “Researching more, and seeing how many animals are relinquished and euthanised each year, astounded me.”

Hannah’s aim through her research project is to raise awareness of separation anxiety among dog owners, which she says has become more important due to people spending more time at home during the national lockdowns.

“Awareness will aid in protecting the owner and canine bond as understanding to aid prevention, is always much better than cure”, added Hannah, who comes Manchester but says she feels very much at home at Harper Adams.

“I have always craved the outdoors and felt most at ease when in the countryside. The support at Harper Adams has been incredible, it’s never felt like just a university, but more of a home away from home”

Hannah is looking for dog owners that have had a disruption to their normal routine to complete her survey with responses due by the end of February.