“I have been interested in Forestry since travelling to the Pacific north west and seeing the vast forests there. During this time, I thought that a career in forestry would be too good to be true. When I found the degree at Harper Adams University, I knew this was my route into the forestry industry." 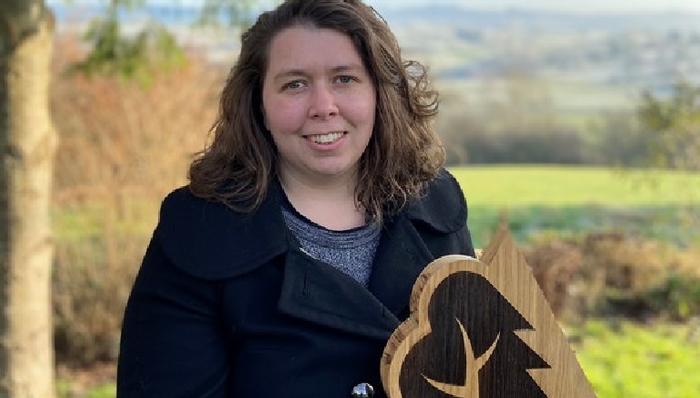 Amy Shepherd has been named ‘Top Student’ in an award recognising the next generation of UK foresters.

A national award recognising the next generation of UK foresters has been secured by a Harper Adams graduate, who is building herself a new career in the sector.

Amy Shepherd, who studied for a BSc (Hons) in Countryside and Environmental Management at Harper, secured the ‘Top Student’ award from Tilhill forestry.

The award is the latest recognition of Amy’s success on a path she was inspired to follow during her travels in the Pacific north west - which led her to Harper as her first step into the career of her dreams.

She said: “Winning the Tilhill Award has been a wonderful achievement and I am so grateful for it.

“I have been interested in Forestry since travelling to the Pacific north west and seeing the vast forests there. During this time, I thought that a career in forestry would be too good to be true. When I found the degree at Harper Adams University, I knew this was my route into the forestry industry.

“During the degree course, my skills have developed in a wide range of areas from woodland management, soil science and ecology to water management, all integral to forestry activities and a career in this discipline.”

Amy’s win was marked with a dedicated online ceremony – and she also received £250 in prize money and a specially-carved wooden trophy from David Edwards, Tilhill’s Wales and Marches Regional Manager.

The Top Student award is one of a series which Tilhill presents to top performers on forestry-related degrees across the UK. Making his presentation, Mr Edwards paid tribute to both Amy and to her fellow Harper Adams graduates – noting that students from Harper were strongly represented in the industry across his region.

He said: “It is my pleasure to present Amy with this award for her outstanding work whilst studying for her degree in Countryside and Environmental Management.

“There has never been a more exciting time for graduates to be starting a career in forestry. The industry is, after all, a part of the solution to mitigate the impact of climate change. Congratulations to Amy, I wish her every success for the future.

“Within my own region we have had more Harper Adams graduates than any other university and we think that is a great reflection on the courses taught by Jim and his colleagues.”

Principal Lecturer in Forestry and Forest Products at Harper Adams, Jim Waterson, added: “It is great to see this kind of recognition for someone who has worked hard and committed everything to a course programme.

“Amy was a pleasure to work with and to teach and I am absolutely delighted Amy has chosen a career in the sector, carving out what will be a useful and constructive career in Forest Management.

“Thank you to David for presenting and Tilhill for sponsoring this award. We really value the relationship we have developed over many years with Tilhill, it goes above and beyond when we can recognise achievement through Amy’s hard work and Tilhill’s support.”

Amy is now looking forward to building her career in forestry – and applying her prize-winning skills to a newly resurgent sector.

She added: “Forestry has taken a new positive turn in recent years, with local and national governments realising the importance of trees. Graduating during this time is exciting and I can’t wait to see what the future will hold."