“Judith and Jude have made enormous contributions to their respective fields over the years and we hope that the Honorary Degrees we have conferred will demonstrate our appreciation for all they have accomplished in support of the UK’s agri-food sector.” 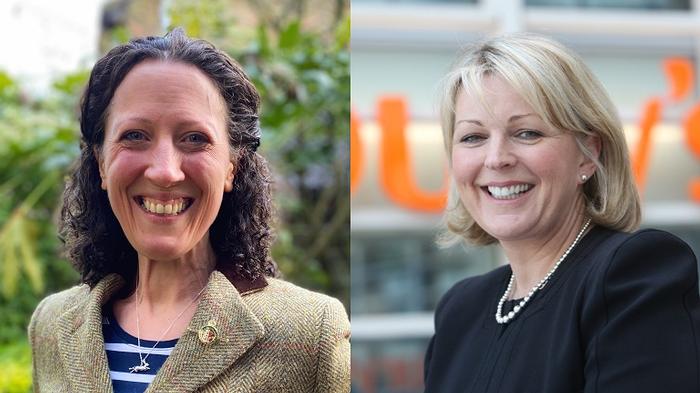 Dr Jude Capper and Judith Batchelar OBE have been recognised for their significant contributions with the awards.

Two leading businesswomen at the forefront of the agri-food sector are the latest recipients of Honorary Degrees from Harper Adams University.

The Honorary Degrees were conferred upon the nominees at a special virtual ceremony in late March.

At their conferment, both Judith Batchelar OBE, Director of Corporate Responsibility, Sustainability and Public Affairs at Sainsbury’s, and leading independent Livestock Sustainability consultant, Dr Jude Capper, received an Honorary DSc for their significant contributions to their respective fields.

Judith, a biochemist and registered nutritionist, has more than three decades’ experience in the food and drink industry – and received her award in particular recognition of her work at national level on a range of Government advisory bodies on food and farming and her promotion of resilient and sustainable farming and food systems.

Deputy Vice-Chancellor of Harper Adams University, Professor Michael Lee, said: “Judith Batchelar’s career has seen her not only playing a leading role at the heart of some of our most recognisable food and drink companies – but also driving forward sustainable food and farming solutions and the agri-tech strategy.

“That work - from her co-chairing of the AgriTech Leadership council between 2015 and 2018, right through to her current roles on the Food and Drink Sector Council, the Food Farming and Countryside Commission, the Made Smarter Commission, the National Environment Research Council, and more – has transformed agriculture and food production in the UK.

“It is a pleasure to recognise her many achievements with this Honorary Doctorate.”

In welcoming her award, Judith said: “To receive this Honorary Doctorate from Harper Adams University is a humbling moment for me. I have been lucky enough to pursue a career in a sector that I love, to work with people I respect and admire, and to have had the opportunity to contribute to our collective ambition to develop healthy, sustainable, and resilient food and farming systems.

“To be recognised for this not just for myself, but on behalf of my fellow collaborators, gives me huge pleasure.”

Meanwhile Dr Capper – the winner of the 2018 Farmers Guardian British Farming Awards Farming Hero of the Year – received her award in recognition of her contribution to the UK livestock industry, where she has worked to build a greater understanding of the global importance of livestock production and communicate its importance to a wider audience.

She said: “As a proud Harper Adams alumna from a non-agricultural background, I am so grateful for the award of this wonderful degree. It is a joy and a privilege to work with the best livestock industry in the world, and I will do my very best to live up to this incredible honour.”

Vice-Chancellor of Harper Adams University, Dr David Llewellyn, said: “Dr Capper has played a significant role in promoting the understanding of sustainable livestock production, building on her research conducted in the USA and the UK.

“Jude is also helping the next generation of agriculturalists, through her activities in supporting the development of apprenticeships and her contributions to other national industry bodies.  We are delighted to be able to add to the industry recognition that Jude has already received with the award of an Honorary Doctorate.”

Dr Llewellyn added: “Judith and Jude have made enormous contributions to their respective fields over the years and we hope that the Honorary Degrees we have conferred will demonstrate our appreciation for all they have accomplished in support of the UK’s agri-food sector.”

Judith Batchelar is the Director of Corporate Responsibility, Sustainability and Public Affairs at Sainsbury’s working on areas such as policy, regulation, climate change and biodiversity, covering everything from soil health to animal welfare and the National Food Strategy. Judith has worked in the food and drink industry for over 35 years and is a Biochemist and Registered Scientist. She has a particular interest and expertise in building resilient and sustainable farming and food systems

Prior to Sainsbury’s, Judith held a similar role at Safeway, spent twelve years in the Food Division at Marks & Spencer, most latterly driving their Health and Well-being strategy, and prior to this worked in manufacturing for Mars and Bass.

In addition to her work at Sainsbury’s, Judith is a Non-Executive Director of both the Environment Agency and the Rugby Players Association, and is a Deputy Chair of Farm Africa. She is also a Trustee of the Royal Botanic Gardens Kew, Accounting for Sustainability and the Matt Hampson Foundation. Judith is a member of the Institute of Food Science and Technology (IFST), and a fellow of the Royal Society of Arts and Manufactures.

On agriculture, food and farming, from 2013 to 2018 she co-chaired the Government’s AgriTech Leadership Council, working on the implementation of the UK's first Agri-Tech Strategy, and now sits on the Food & Drink Sector Council, Chairing the Innovation Working Group. Today she is a Commissioner on both the Food Farming and Countryside Commission, and the Made Smarter Commission. In 2020 she became a Council member of the Natural Environment Research Council and Chairs the Programme Advisory Board for the Industrial Strategy Challenge Fund for Transforming Food Production and the Strategic Priorities Fund on UK Food Systems.

Judith has been instrumental in supporting the proposal to establish a professional body for production agriculture and horticulture that has gained support from DEFRA and will play a role in the agricultural transition. Judith was recognised for her contribution to food and farming with the award of the OBE in the 2015 Queen’s Birthday Honours.

Dr Jude Capper studied agriculture with animal science at Harper Adams, but she is reported to have said that she did not have a particular career path in mind when she graduated. Instead, she decided to continue studying and stayed at Harper to complete a PhD in ruminant nutrition and behaviour.

While she was writing up her PhD, she was invited to undertake some post-doctoral research at Cornell University.  She says that she: “…went as an animal scientist, researching milk fatty acids, and started working on carbon footprints just as the US dairy industry was starting to think about sustainability. I could not have planned my career; it evolved over time.”

From Cornell, Jude went on to take up a faculty position at Washington State University, before eventually returning to the UK to become a livestock sustainability consultant. Jude is the Chair of the Route Panel for Agriculture, Environment and Animal Care; and the Vice-Chair of the Green Apprenticeships Advisory Panel at the Institute for Apprenticeships and Technical Education.  Jude also serves on the board of the National Beef Association and represents North America within the British Society of Animal Science’s Global Association. She is passionate about sustainability issues and the role of animal agriculture in helping to feed a hungry world using fewer resources, and her current research and outreach work focuses on modelling the environmental impact of livestock production systems.

That passion has given Jude a high profile in the agricultural industry.  She was awarded the Women in Dairy ‘Dairy Industry Woman of the Year’ in 2017 and the Farmers Guardian ‘Farming Hero of the Year’ In the 2018 British Farming Awards. Jude was also made an Associate of the Royal Agricultural Societies in 2018.

Jude has worked tirelessly to communicate the global importance of livestock production, while also improving the understanding and knowledge of stakeholders within food production, from farmers and retailers to policy-makers and consumers. To this end, Jude launched a successful social media campaign in 2018 to promote the role of UK dairy farmers and dairy products. #Februdairy galvanised British dairy farmers and others within the industry to share their positive and sustainable farming practices with the wider general public.