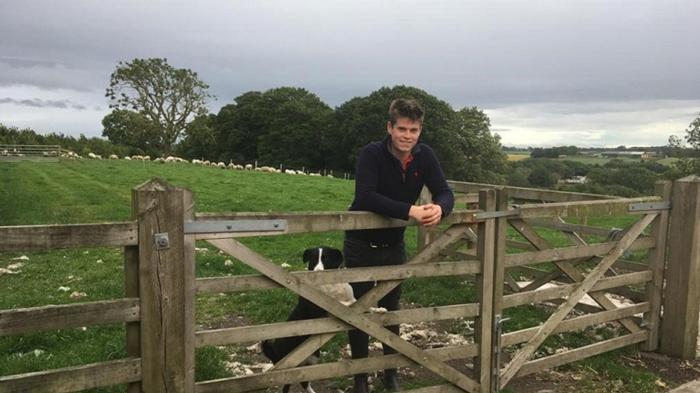 A graduate of Harper Adams University who won a dream job in Yorkshire is building up his first farm - and attracting media attention along the way!

Rob McAneney, who is originally from Darlington, was selected to be the tenant at Scow Hall, a farm owned by Yorkshire Water, after winning a competition which formed part of the firm’s Beyond Nature Next Generation Farming plans.

Rob initially picked up on the competition, where entrants had to make a case as to why they would be the right tenant for the farm, on social media last year. He applied, and after a rigorous selection process, was picked from almost 50 entrants after impressing judges with his vision for the land and his understanding of Yorkshire Water’s Next Generation plans.

He said: “I saw it advertised on Facebook – and when I saw it, I actually thought it was too good to be true!

“The application had to be in in September – then about a month after that, they asked us to make a video where we talked about our plans for the farm. It was about another month after that that they made the final decision – so I got to hear before Christmas I’d be moving in!”

Earlier this year Rob, 23, made the move from his family’s smallholding down to Scow Hall – located between Otley and Harrogate - with the knowledge he has half a decade to shape the future of the farm.

He added: “It’s a five-year tenancy, and after that Yorkshire Water will either help me to find a tenancy at another of their farms, or to find somewhere else.

“It’s quite the responsibility – it’s a bit mind-blowing! It didn’t really sink in until a couple of weeks after I had moved in in February, when I sat down about two weeks after I ‘d got there – and finally had a chance to appreciate what had happened.”

In his first few months, Rob has been working to build up the livestock on the farm – as well as dealing with a number of media requests from programmes wanting to cover his story, including both BBC News’ Look North and Channel 5’s This Week on the Farm.

The latter gave Rob a chance to get some advice from one of Yorkshire’s most well-known farmers, Yorkshire Shepherdess Amanda Owen, who visited Scow Hall to watch his progress in training sheepdog puppy Jip – and to find out more about his plans for the farm.

He said: “They phoned me and said ‘Channel Five want to come and film you – and Amanda Owen is coming too’ and it was just like ‘what? I don’t know what to say!’ Having Amanda come along was great though, in fact it has been a great experience all round.”

With lambing season drawing to a close, Rob is now looking towards his wider plans for the farm.

He added: “It has been going well, I am just trying to get to grips with it all. We have almost finished the lambing now, I have got some pigs, and I’ve got cattle coming in the next three or four weeks. I’ve got around 120 sheep and am hoping to end up with around 250.”

As he builds the farm, Rob will be drawing on his studies at Harper Adams – where he first studied a foundation year which he then topped up to a full degree with a BSc (Hons) Agriculture (Top-Up) qualification.

He added: “Studying at Harper was absolutely brilliant – it was a great experience and I wouldn’t change it for the world.”