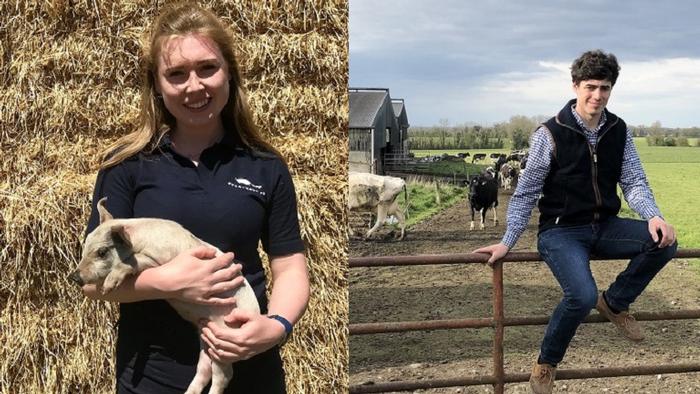 Harper Adams University students have secured two places out of the final three in this year’s Farmers Weekly Agricultural Student of the Year Award competition.

Dr Russell Readman, Course Manager for Agriculture at Harper Adams University, said: “Building on the success in previous years, it is excellent to see two Harper Adams Agrics shortlisted again for this award.

“Both are excellent students and have contributed in different ways more widely to the University and the wider agricultural community. Their success in being shortlisted underlines the quality of Harper Adams Agriculture students.”

Chloe, from Suffolk, will be taking up a position with Savills, Oxford, as a Food and Farming Graduate once she completes her studies this summer.

She was nominated for the award by Senior Lecturer Wyn Morgan, who said: “Chloe is a shining example of what hard work can achieve. This, matched up to intelligence and a firm grasp of the industry - especially pigs as far as Chloe is concerned - will no doubt bring her both huge personal satisfaction and a rewarding career.”

The Farmers Weekly Award shortlisting comes hot on the heels of Chloe’s recent scholarship success – when she was named the recipient of the Harper Adams Club President’s Scholarship.

She added: “I feel shocked to be shortlisted as a finalist but also delighted. Although I have worked hard on my studies and grasped any opportunities both at university and in the wider industry, when I applied I really didn’t think my application would stand out to the extent that I was shortlisted.

“I feel that alongside my academic achievements, my non-academic achievements were also very important in securing the shortlisting - I am very passionate about educating the general public about where their food comes from. I am proud to be a member of the executive committee of Ladies with Pigs, a national organisation for whom I have written UK newsletters, helped on their rebrand - and organised their 30th anniversary ball.

“Harper Adams has given me the opportunity to apply for scholarships and I was grateful to receive two during my time here. In addition, I was fortunate to receive two placement awards and I was also invited to present to students about my placement experience.

“I have had the best four years studying at Harper Adams. It has been the perfect balance of practical and theoretical work and given me the opportunity to thrive.

“Harper Adams is full of opportunities and it is very much the case that the more you put in, the more you get out.”

Meanwhile John, from County Meath in Ireland, was nominated by Senior Lecturer -and Associate Head of the Agriculture and Environment Department- Matthew Rodenhurst.

John has been working to boost his family farm through the use of digital technology – using apps and software to track what is happening on the 200-acre dairy farm – and through his burgeoning fame on TikTok and YouTube, platforms he uses to raise awareness of farming issues in the UK and Ireland to thousands of followers.

He said: “When I received the call, I was uploading my first YouTube video.

“I got the call and I was over the moon, I never imagined that I would be shortlisted for Agriculture Student of the Year for the UK.

“It is an honour to represent Harper in such a prestigious award from the Farmers Weekly. Coming from Ireland to study Agriculture has given me so many opportunities and experiences that I had never imagined in my wildest dreams.

“As my mentor says, reach for the stars - I am only halfway there, but now being shortlisted for Ag Student of the Year certainly has propelled me to keep reaching for those stars.

“It has been very enjoyable studying at the renowned Harper Adams University – I have loved every moment of it, from meeting new friends to expanding my connections in the UK ag sector -as well as the top-class teaching facilities, from the dairy unit to the indoor soil hall, and the lectures within the FdSc agriculture courses.

“I feel my studies have greatly helped me in securing the shortlisting. The lecturers and tutors have given me the confidence and support throughout my years at Harper – and for that I am entirely grateful and indebted to them.

“I have brought away some memories which I could not buy, and I will be sad to say goodbye.”

This year’s winning student will be announced at the Famers Weekly Awards ceremony on October 7 this year. The awards will be judged by a panel including independent judge Alex Dunn, news reporter Ed Henderson, and last year’s Ag Student of the Year winner – and Harper Adams alumna – Grace Welling.