A research project design by a Harper Adams University student has been transformed into reality by an agricultural machinery company – who have also offered the student his first industry role. 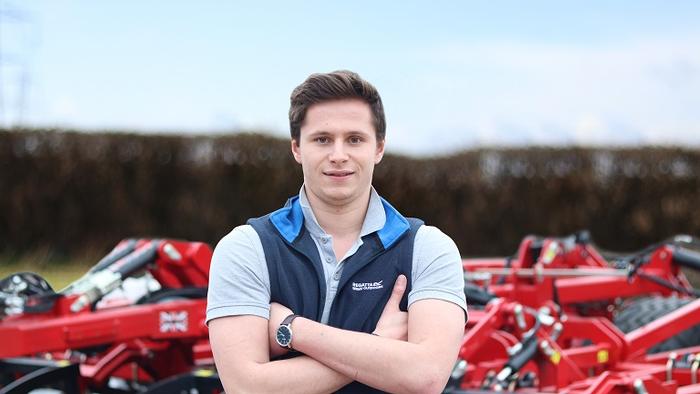 A research project design by a Harper Adams University student has been transformed into reality by an agricultural machinery company – who have also offered the student his first industry role.

Charlie Harvey, a final year B Eng (Hons) Agricultural Engineering student, had been working with Sumo UK on his proposed designs for an inter and intra row weeder for cereal crops – and as his project progressed, Charlie found himself also collaborating with the company’s design team to turn that design into a working prototype.

The initial idea for the project began for Charlie back at his family farm, in the Bordeaux region of the south of France.

He said: “So back home, we have recently converted 100% of the farm into organic which has created a big issue with tackling weeds in the crops - as the usage of chemicals is extremely limited.

“We have been trying numerous different products, brands, and methods to tackle this ongoing problem, but all of them have a common issue, with the machines getting blocked from there being a lot of trash on the floor and little control of the intra-weeds.”

Charlie decided to design his inter-and intra row weeder as a final year research project, and as he set to work on his designs, he spoke with a number of designers at Sumo UK about his plans. He also visited the company’s headquarters in Melbourne, near York, to discuss his plans as he refined the proposed machine.

He added: “Having the opportunity to work with Sumo for this particular project, has not only allowed me to acquire more valuable experience within industry, but I have also been able to put into practice all the knowledge I have learnt during my course at Harper Adams University, whether that would be from doing the fundamental initial research to designing and testing a new concept.

“I have been concentrating on a design to control the trash in front of the tines with the use of a flat disc to cut a path in front - this will also reduce draught force on the tines of the machine, meaning it will also be more fuel efficient. Different style of tines will also be tested, to figure out what works best in terms of burying the weeds in the intra row.

“The design of the inter-row weeder will be mounted on Sumo’s current Toolbar, whilst using as many as possible of their own parts.  The project has a bigger scope of introducing camera guidance, which will gather data on the crop’s growth, diseases and nutrition - and create a field map, as well as guide the weeder.”

As the project came together Charlie was able to take his design off the drawing board.  With the assistance and technical advice of the team at Sumo UK a prototype model was built– which Charlie then visited to Sumo’s factory to see for himself.

He added: “Unfortunately, we were not able to start testing as the trial field was too wet when I visited.

“I was a bit nervous before the manufacturing process - but I am very relieved that it has all come together and I am very much looking forward to getting out in the field!”

After spending several months working alongside Sumo’s product designers, Charlie has now been asked to join the team as his first step into industry after university.

He added: “Working with Sumo on this project has been an amazing opportunity to gain more engineering experience, but also to carry on pursuing my dream of developing machinery to help sustainable farming.

“The plan is eventually to become a successful Agricultural Engineer making a real difference to the sector – and I have signed a contract to join the Sumo UK team after University, which I am very much looking forward to.”

Gary Stephenson, Engineering Lead at Sumo, added: “Here at Sumo we understand the difficulties the industry is facing with an ever-aging work force, especially in Agriculture.

“We believe the key to future machinery innovation and development of sustainable farming practices lies in the next generation.

“Our goal must be to inspire and support these individuals using every opportunity to ensure attraction and retention within the agricultural industry, we are ecstatic that Charles has decided to start a career in Sumo’s Engineering team and I look forward to seeing him develop his skills.”