“I think the tenacity of both students from Harper this year – and their willingness to use real-life examples – is what impressed the judges.” 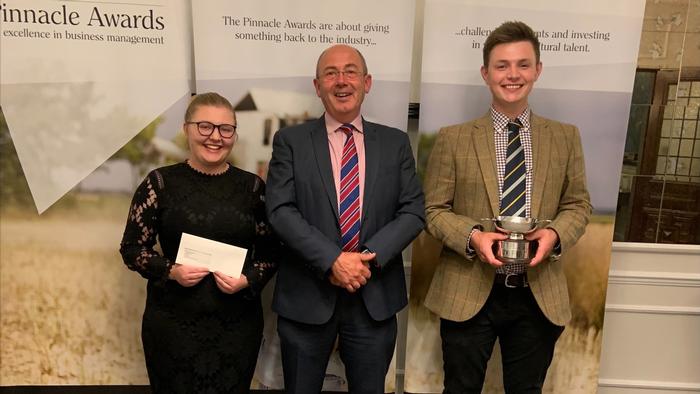 Emily, Tony and Harry at the Pinnacle Awards presentation

Harry, alongside fellow BSc (Hons) Agriculture with Farm Business Management student Emily Mosely and Senior Lecturer Tony Asson, attended the award finals at the Farmers’ Club in London – where both Harry and Emily gave presentations based around work they had undertaken on their degrees looking at farm diversification projects.

Each was tasked with finding a client seeking to diversify their business and carrying out a study to examine how feasible the plans were.

Judges spoke highly of both entries, and chose Harry, from Snarestone, near Ashby de la Zouch in Leicestershire, as this year’s overall winner.

He receives the Pinnacle Gold award, the Nickerson Cup, and £2000 in cash.

Mr Asson – who has seen a number of students from Harper Adams make the finals over the years – explained that the event was a true test of the finalists’ abilities.

“The awards are challenging, though - the final event is a whole day – all of the eight finalists, from across the country, are interviewed by the panel of judges, and then they have to present their idea and this all happens in front of the other finalists, their lecturers and guests and so on.

“The panel then go away and assess everything, come back and present their awards – and then there’s an awards dinner.

“I think the tenacity of both students from Harper this year – and their willingness to use real-life examples – is what impressed the judges.”

Both Harry and Emily chose to use their family farms for their presentations – examining new ways which could potentially be used to add revenue streams to the farm’s work.

Harry said: “After looking at a range of options, I selected a caravan storage option as a project to pursue due to potentially large demand outlined during market research and good financial returns for the business.

“The project was to be a farm-based, secure storage site for caravans and motorhomes offering competitive pricing and good customer service in order to stand out from the competition.

“This was a particularly useful assignment as I hope to diversify the home farm further in the future - and although I may not necessarily pursue the option selected it gave me an insight into the work I must carry out to develop a successful enterprise.”

Meanwhile Emily’s project sought to examine the feasibility of a barn conversion from a derelict property on her family’s Derbyshire farm - and came to an unusual conclusion.

She said: “The reality was a barn conversion was a no go as it haemorrhaged cash and would operate in continual deficit and I do believe honesty is the best policy.

“At the end of the day fixing numbers to make it work on paper is not reality and whether it’s you who owns the farm or it is a client’s farm, no one should go into any diversification where there is no return.

“I am a realist and not a fantasist therefore the farm has looked at other ways to diversify - due to its dependence on subsidy to keep it afloat - whereby my father and I have built a shepherd’s hut which we hope to have finished for the 2022 holiday season.”

Both students were praised by judges – who said Harry’s presentation was robust and detailed and noted ‘a realistic proposal with confident interview and presentation skills’ – and praised Emily for her ‘detailed plans and strong financial analysis – justifying a brave, but correct, ‘not now’ recommendation.’

Both students have spoken of their delight at having been selected as finalists in such a prestigious national competition.

For Emily, while the changes wrought by covid made writing her report trickier – as regulations meant she was not able to receive the face to face learning support which the University has given her to help with her dyslexia – this made securing one of the finalists’ places an even greater accomplishment.

She said: “It was certainly a big achievement that my work was good enough to be selected as a finalist and a memory I will never forget going down to The Farmers Club and presenting my work in front of industry leaders and professionals.”

And Harry added: “With only eight contestants, from universities across the country, it was a huge honour to have been selected as a finalist for the award.

“It was a big shock to win as the other contestants presented very high-quality work and the judges said how difficult it was, but at the same time I felt extremely proud to receive such a prestigious award.”

The top three reports – including Harry’s winning entry – can be found on the Farmers’ Club website.