“Projects like this provide great experience for our students. They are applying their learning not only with a real-world client – but also against a very real world record. The help which they received from GOM during the day was invaluable – it both showed the students key industrial processes at the cutting edge of engineering, and gave them vital data to refine their work." 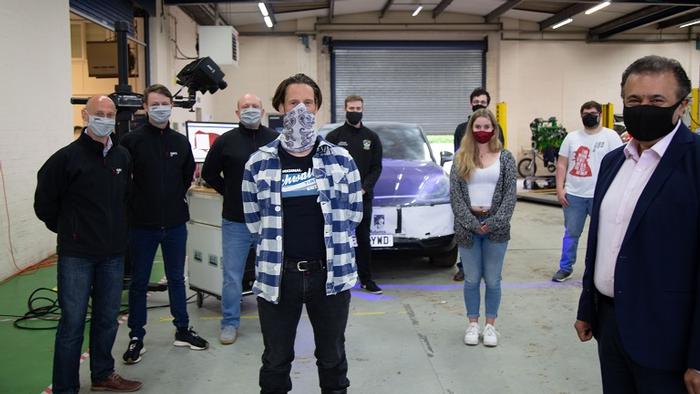 A new attempt to break a series of cycling speed records is set to get underway this autumn – with work between Harper Adams students and leading metrology manufacturer GOM playing a key role.

The shelter will be used in the attempt by British cyclist Neil Campbell (and the Operation Pacemaker Team), who set a world record in 2019 for men’s motor-paced cycling, and is now aiming to beat the world record outright.

Manipulating the air stream behind the car is pivotal for the stability of the rider and car performance, which is why the Engineering team and students at Harper Adams were asked to get involved.

As part of their work on the shelter, earlier this summer the students spent a day working with experts from GOM, a company which specialises in precise industrial measurements (also known as metrology.)

Over the course of several hours, in one of the university’s dedicated engineering workshops, the company took a series of measurements of one of the vehicles being used to design the shelter – and of the shelter itself.

These measurements were then used to create a 360-degree 3D scan of both – which was then fed into a CAD programme which would enable the design to be fine-tuned using further aerodynamic simulation software in preparation for this autumn’s attempt.

Harper Adams University lecturer and aerodynamics engineer James Croxford, who has been working with Neil on his record attempts over recent years, said: “Projects like this provide great experience for our students.

“They are applying their learning not only with a real-world client – but also against a very real world record.

“The help which they received from GOM during the day was invaluable – it both showed the students key industrial processes at the cutting edge of engineering, and gave them vital data to refine their work.

“I’d like to thank GOM very much for all their help in taking this project to the next level.”

Stuart Dix, Sales Engineer Midlands at GOM, said: “It was a real pleasure working with the entire team at Harper Adams, along with Neil Campbell himself, on this exciting project.

“GOM have vast experience in the Automotive sector, and this was a perfect application for the ATOS 5 system to generate a complete digital twin of the entire vehicle and canopy to assist the students with the Aerodynamic improvements needed to break this record.”

Neil met both GOM representatives and the students working on the project when he visited during the scanning, and with final preparations now being supported by a new group of students, he hopes to undertake his next land speed world record attempt within the next few months.

He added: “James Croxford has already proven pivotal in the success of our current World Record, offering critical aerodynamic insight whilst encountering stability issues during our last attempt.

“The Masters’ students’ work will allow the pace car to travel faster whilst still creating more stable air behind - the result being a fast record with safer conditions. GOM have been incredibly supportive and their expertise invaluable.

“I’d like to take this opportunity to extend my sincere thanks to the team at GOM, the hard work of the students and Harper Adams University”.