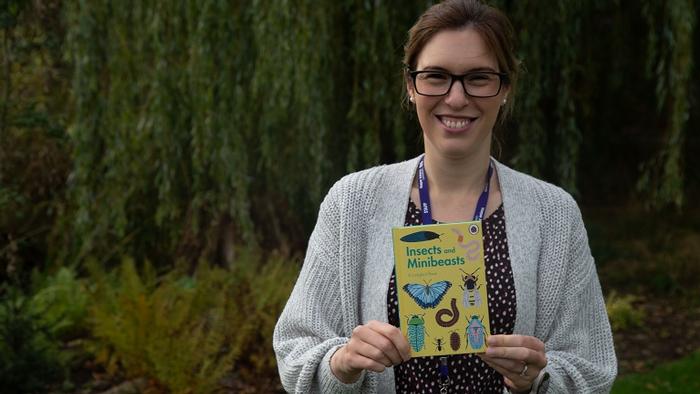 A new Ladybird book aimed at encouraging young children’s love of insects and other invertebrates has been given a helping hand - through the expertise of a Harper Adams University lecturer.

Dr Heather Campbell, who is a Lecturer in Entomology at the University, was asked to work as an entomological consultant on Insects and Minibeasts, one of a series of Ladybird books on the natural world.

The book was written by Libby Walden, and illustrated by Amber Davenport, with Heather playing a vital role in ensuring that the creatures it featured were correctly depicted and that the book was scientifically accurate.

She said: “They had some idea of the content they wanted when I started working with them – then they brought me on board to make sure everything was entomologically correct.

“What they basically wanted was for someone to say ‘this is wrong’ – or to tell them when there were interesting things they could say about each insect. What I would do is send them a lot of notes, saying things like ‘no, that leg runs from that part of the body’ or ‘no, that wouldn’t be that colour.’

“It may sound like nitpicking, but they wanted to get it right – and those corrections are the kind of things scientists do!”

While Heather had previously worked upon other books, including a chapter in 60 Second Ecology, and has written academically, the Ladybird book was the first of its kind she has worked on – although she is keen to pass on her love of entomology and the natural world to students of all ages.

She added: “Obviously, as lecturers, we operate at a university standard and we teach at that higher level, but we are all also trying our best through our other strands of work – such as this book -  to get people into entomology.

“What that does mean is that getting this right is valuable. If you get the information right when you are doing this kind of thing, then kids will remember it.

“You don’t need to dumb things down because they are children – they understand these concepts. For younger children, it’s at the point where they are often learning all kinds of words, so even something like ‘exoskeleton’ is just another word for them!”

Having completed and signed-off the project earlier this year, Heather now has received some completed copies of the book – and is keen to share them with the young naturalists in her family after having been inspired as a child by similar books.

She added: “As a child, I was always outside – I loved nature and wildlife and I was always looking at stuff.

“I also read voraciously, so I must have read loads of Ladybird books!”