“Seeing the overwhelmingly positive reaction from the public really put a smile on my face. It was great to see Londoners cheering our float on whilst also chatting to them about what we’re doing as an industry to be part of the climate solution.” 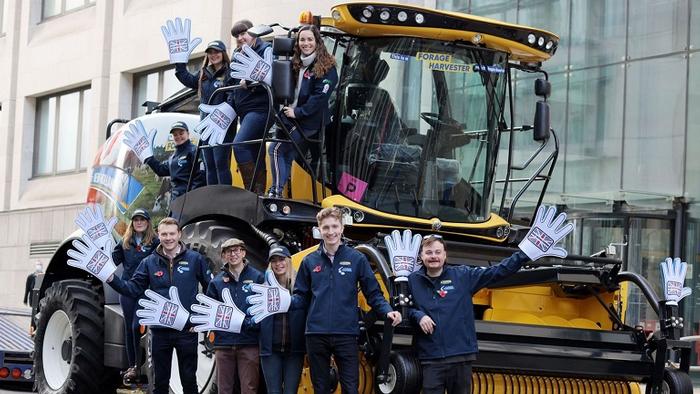 Harper Adams student Joe Bramall – centre in this picture – has taken part in this year’s Lord Mayor’s Show as an NFU Young Ambassador. Picture used with thanks to the NFU.

The return of the annual Lord Mayor’s Show in London has given Harper Adams student and NFU Young Ambassador Joe Bramall a fresh chance to showcase British farming to a mass audience.

Joe, from Chester, is a BSc (Hons) Agri-Business student at Harper Adams, as well as an NFU Student and Young Farmer Ambassador. It was through this latter role that Joe found himself at this year’s Lord Mayor’s Show – and through his presence at the show that he found himself being interviewed live on television by the BBC’s Mollie King.

He said: “After COVID cancelled last year’s show, it was great to finally be able to get out and speak to the public about British farming!

“The Lord Mayor’s Show has been running for over 800 years showcasing the different trades in and around the City of London. We were there as part of the float run by the Worshipful Company of Farmers, a livery company formed in 1946 dedicated to advancing the farming industry and people within it.

“Our float - arguably the best - consisted of a methane powered tractor, a trailer showing support for UK dairy farming and a forage harvester. It was supported by the NFU, New Holland, Red Tractor and Surrey Docks Farm and a huge thanks must go to everyone who was involved in pulling off such a brilliant event!”

Being able to take part in this year’s show in person meant that Joe was finally able to meet a number of industry figures who he has been working alongside but has, until now, been speaking to virtually.

He added: “Being a part of the parade was an incredible experience and one I’ll never forget. Getting together as a group was great after what has been nearly two years of Teams calls and social media interaction!

“It was also great to meet Stuart Roberts, Deputy President of the NFU, Christine Tacon, Chair of Red Tractor and Karen Mercer, Master of the Worshipful Company of farmers.

“I was able to take the opportunity to learn so much about our sector from them.”

Joe works to raise the profile of British farming across multiple social media platforms, from TikTok and Instagram to LinkedIn and Twitter. He has also given a series of media interviews in his Ambassador role – and was able to give another, live on national television, as he made his way through London’s streets with the Worshipful Company of Famers float.

As #COP26 draws to a close, it was great to have NFU Student & Young Farmer Ambassador @JoeBramall talking about British farming's commitment to be net zero by 2040 and climate-friendly food, on the live coverage of this year's #LordMayorsShow #BackBritishFarming ??????‍?? pic.twitter.com/CSr9yX0Dhs

He added: “One highlight for me was being interviewed by Mollie King for the BBC’s coverage of the parade. It was great to be a part of spreading the positive #BackBritishFarming message.

“Seeing the overwhelmingly positive reaction from the public really put a smile on my face. It was great to see Londoners cheering our float on whilst also chatting to them about what we’re doing as an industry to be part of the climate solution.”