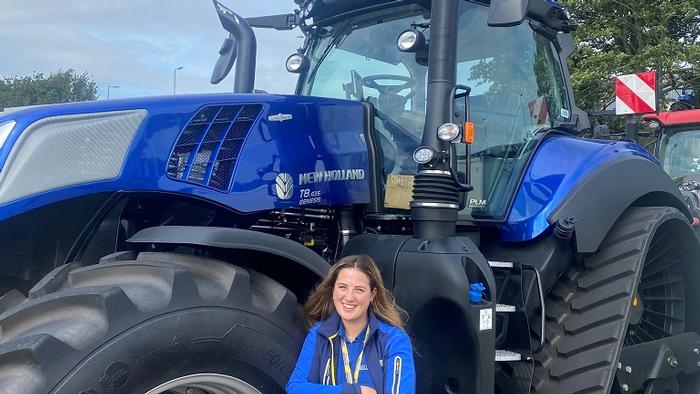 Spending her placement year with a leading agricultural machinery manufacturer gave one Harper Adams Mechanical Engineering student a rare behind-the-scenes insight into the development of an innovative renewable energy-powered tractor.

BEng (Hons) Mechanical Engineering student Annabelle Taxis began her placement year at CNH Industrial in July 2020 working at one of the company’s plants in Essex as a new product launch engineering intern.

She is now hoping to build upon her experiences further through an upcoming research project, focusing on the development of the T6 Methane Power Tractor, which she was able to see first-hand during her placement.

Annabelle said: “I am not really sure how far I can go into everything in my upcoming project – I need to have another meeting with CNH about my paper!

“They are happy to work with me on the research though, and they have also said they will welcome me back when various areas are up and running to see them in operation and to see the work I helped with finished.”

The T6 tractor has been adapted so it can run entirely on methane as an alternative fuel, which means farmers can make use of agricultural or animal waste to fuel their vehicle.

Annabelle described the placement as extremely valuable, noting how it allowed her to involve herself in a variety of engineering departments and disciplines during her time at CNH International, including process, design, manufacture and internal logistics, as well as redesigning kitting and pre-assembly areas for new parts being introduced.

And she believes the opportunity to undertake a placement year – which is an integral part of degree courses at Harper Adams – sets the University apart from others when it comes to equipping its graduates with real-life experience.

She added: “It really helps you, having the placement year, and I think it puts you at a massive advantage afterwards.

“Lots of people at other universities finish with a degree, but then don’t know what to do about it. The placement year gives you a chance to test yourself, but you also have that safety net of knowing that you return to university.”

Annabelle was brought up and educated in Florence, Italy, until the end of her secondary education and decided to pursue her interests in engineering through a degree while taking her A-levels.

Annabelle was drawn to Harper Adams after both experiencing the social life at the university while visiting a friend - and encountering the University’s engineering facilities and friendly atmosphere the following day.

She added: “I had kind of set my heart on Harper. I first visited through a friend of a friend – I came here for a Christmas ball and it was so much fun! I was shown round the campus the next day, and I remember thinking ‘this is where I want to be, and it is what I want to be doing as well.’ Everyone seemed to know everyone.

“It has been great coming here – I really have enjoyed it, and I will very much miss it when I finish.

“One fourth year told me that the worst part of their final year wasn’t even the exams – it was leaving Harper.”