“The chance for the students to compete at national competitions – such as the Pinnacle Awards -  with other universities and colleges gives them the opportunity to  network with some of the leading people in the sector - and to benchmark their work with other students.” 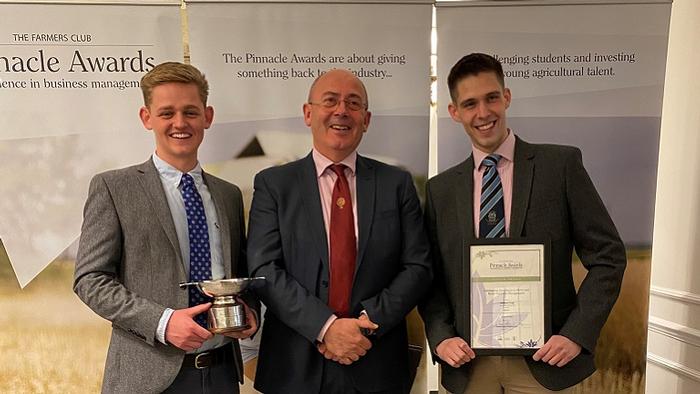 Ben Chilman, left, with lecturer Tony Asson, centre, and coursemate Will Pugh, right, at the Farmers Club in London after receiving their awards.

Harper Adams University students have once again proven their mettle at the Farmers Club Pinnacle Awards – securing both first and second place at this year’s ceremony.

The pair’s success marks a second successive year where Harper students have taken first place at the awards – which demonstrate excellence in business management - after last year’s gold prize was taken by student Harry Davies.

To win, Ben and Will went up against six other shortlisted students from across the UK, with each being encouraged to develop innovative, competitive and realistic business strategies for projects which also met wider environmental requirements.

To reach a shortlist, student projects were put forward by their tutors, and then assessed by a panel of judges from The Farmers Club, ADAS and The Cave Foundation.

Once the shortlist was decided upon, finalists were invited to The Farmers Club in London for an interview and provide a presentation of their project.

Prizes were presented to the top three at a formal dinner on the same day with the panel, friends, families and lecturers. The first placed prize winner – which was Ben this year - received the Nickerson Cup and The Farmers Club Gold Student Pinnacle Award of £2000.

Ben, who submitted a farming diversification proposal based on glamping, said: “I’m over the moon to win the Pinnacle award and completely surprised!

“It’s been a very enjoyable final year at Harper Adams and I will take away some great memories and friendships.”

Senior Lecturer Tony Asson – who travelled down to London with Ben and Will to see their final presentations – said: “I think what I picked up from the judges was that our students’ reports were realistic, achievable and well researched, particularly on understanding the market, customers and the inevitable competitors.

“It is these real-life case studies that give the students the chance to apply techniques they learn in the classroom to make business decisions in the real world.

“The chance for the students to compete at national competitions – such as the Pinnacle Awards -  with other universities and colleges gives them the opportunity to  network with some of the leading people in the sector - and to benchmark their work with other students.”