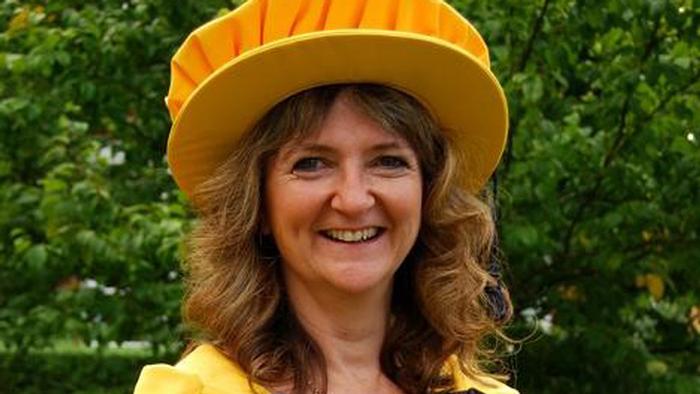 It is with great sadness that the Harper Adams University community has learned of the death of sustainable farming leader, Caroline Drummond MBE.

Caroline was the Chief Executive of LEAF (Linking Environment and Farming).

“It is with profound sadness that we announce the death of our beloved CEO Caroline Drummond MBE, who passed away yesterday,” LEAF announced on May 23. “Caroline transformed LEAF from small beginnings 30 years ago to where we are today. There are no words to express how much she will be missed.”

Caroline, who last visited the University in March for discussions about the School of Sustainable Food and Farming, was awarded the MBE in 2009 for services to the agriculture industry. In 2013 she received an honorary doctorate from Harper Adams in recognition of her work to combine modern farming with conservation and in engaging the public in farming matters, and in 2017 she was awarded the IAgrE Award for Contribution to the Landbased Sector.

University Deputy Vice-Chancellor, Professor Michael Lee, said: “Our thoughts are with the family, friends and colleagues of Caroline Drummond MBE, whose loss will be felt across the whole farming community. Caroline was both a friendly face and positive driving force, advocating for both the development of more sustainable farming methods and the facilitation of greater connection and understanding between the food-buying public and agriculture.”

Educated at Seale Hayne Agricultural College, Ms Drummond became a lecturer in agronomy at Shuttleworth College and joined LEAF at its inception in 1991.

She was a founding member of the European Initiative for the Sustainable Development of Agriculture, served as Chairman of the 2005 Oxford Farming Conference Council, and as a Fellow of the Royal Agricultural Society.

In addition to these appointments, Caroline was a founding director of the Assured Combinable Crop Scheme and sat on a variety of steering groups, including various DEFRA committees and the Boards of Rothamsted Research and the Council for the Protection of Rural England.

Upon the award of the honorary doctorate from Harper Adams at the 2013 graduation ceremony, she said: “It’s a fabulous honour to be receiving an honorary doctorate from Harper Adams University. The university is doing so well in really encouraging a new generation of agricultural students to come through, and as we see all the changes ahead of us over the next 10 to 20 years, that education, that innovation and that enthusiasm is something that is really, really needed, so it is really a great honour from my perspective and obviously on behalf of all the people who are supportive of LEAF and what we do at LEAF.

“Good luck to everybody going out into the big, wide world after your graduation. It is a fabulous opportunity for anyone who has knowledge now in food, farming and the environment because this is where the future’s at.”

Professor Ken Sloan, Vice-Chancellor said: “As we approach our graduations this year, we will do so with a mixture of sadness and pride. Sadness at the tragic loss being felt by colleagues at LEAF and the agricultural sector at the loss of Dr Drummond. Pride at the University’s close association with her and the profound effect that she has had on the industries that our new graduates will join. May she rest in peace.”