“This is another great result. It continues our run as the highest-rated modern university, and rising once again in the rankings is a testament to the hard work and commitment of our students, employees and partners." 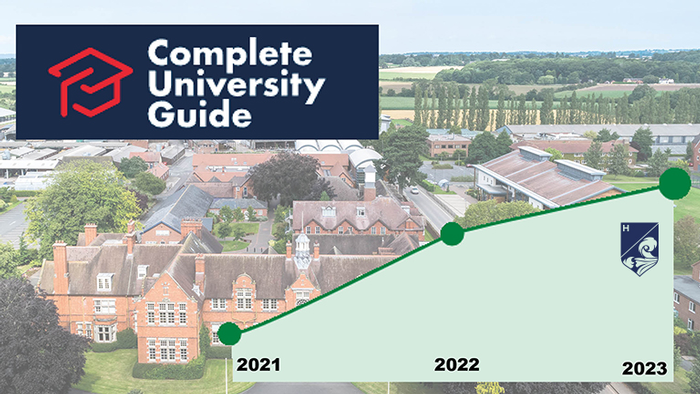 Harper Adams has climbed the ranks once more in the UK’s Complete University Guide 2023 - keeping its position as the UK’s best modern university.

The Guide’s publisher said there had been significant changes within the league table as new centres of excellence competed for positions of greatness within league table. Harper Adams has climbed to position 29 and retained the highest modern university ranking.

Vice-Chancellor of Harper Adams University, Professor Ken Sloan, said: “This is another great result. It continues our run as the highest-rated modern university, and rising once again in the rankings is a testament to the hard work and commitment of our students, employees and partners.

“Our students go on to key roles across a diverse range of agri-food, veterinary and related organisations. We’ll continue working to produce both cutting-edge, impactful research, and highly-skilled graduates, to help meet the global challenges our industries – and our planet and its population – face.”

In the subject rankings, Harper Adams is placed top five this year in Agriculture and Forestry, rising five places from its top ten ranking last year.

Harper Adams remains number one in the country for facilities spend in the Guide.

The University’s new Veterinary Education Centre being officially opened in 2021, and work is currently underway to support the second phase of upgrades for teaching and learning in veterinary medicine, veterinary nursing, veterinary physiotherapy and allied para-professions at Harper Adams thanks to a £500,000 Strategic Priorities Grant from the Office for Students.

Employment prospects is another metric where Harper Adams University really stands out – with a top five placing in this year’s ‘graduate prospects – on track’ ranking, which measures how well graduates feel their current activity fits with their future plans.

In May the University won the Whatuni Student Choice Award for Career Prospects – for the sixth time since 2016.

The national Graduate Outcomes Survey 2021 also showed that more Harper Adams graduates were in work or further study 15 months after completing their first undergraduate degrees than any other UK based former students.

All Harper Adams University courses are developed in conjunction with relevant industry representatives to ensure the curriculum delivers the calibre of employees needed. A critical part of every course is a full placement year working in industry, during which they can apply and hone their skills and knowledge.

Simon Emmett, Chief Executive Officer of IDP Connect, said: “With more prospective students actively researching their options each year, the 2023 Complete University Guide league tables will serve as an important guide. We believe these rankings help them to make the right decisions as they consider their next steps into higher education.

“The independence of the Complete University Guide remains a critical part of our organisation. The tables’ independence from our other operations ensures that students, parents, and advisors can trust the results and make informed choices based on them.”