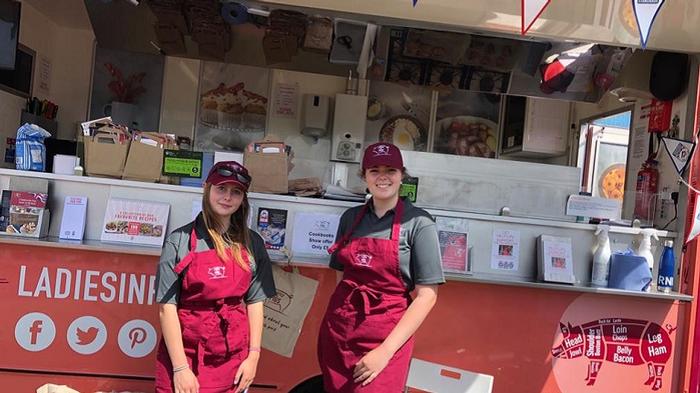 A love of agriculture has seen a young woman rethink her plans to become a lawyer, follow her farming dreams – and work to spread the word about British food in the process.

Having experienced her initial conversion to farming while working a summer job at a pig unit, it is little surprise that Toni Bagguley, from Worksop in Nottinghamshire, is now part of the not-for-profit Ladies in Pigs (LIPs) organisation while she works towards her BSc (Hons) Agriculture at Harper Adams.

She explained: “My Dad has worked with pigs all his life and managed an outdoor breeding unit for just over 25 years – but except for the odd visit, he kept me quite separate from it.

“My plan was to be a lawyer originally – but after I did some work on the farm, I realised I enjoyed it a lot more. So I dropped out of my law course and I applied to Harper Adams instead."

“I had always wanted to work outdoors, but I didn’t realise how much I loved it until I did it. I always knew I liked Agriculture – but I hadn’t realised you could do a degree in it or how important that degree could be.”

Having discovered her vocation, Toni is now keen to spread the word about both British food and farming, and about the opportunities for women within the industry – and during her second year, she discovered LIPs, whose aims echoed her own.

She added: “In the second year, I needed to get more practical experience behind my belt. I contacted Debbie from LIPs, and she told me to come along and see an event or two.

“Ladies in Pigs don’t just focus on pigs – they talk about schemes like Red Tractor, about all areas of food production – and they talk to students too."

"We go to events like agricultural shows and school visits, where we do working demos – and that’s great, as that work is in cities too and it shows agriculture to people who are new to the subject. What is also lovely is how all the ladies in the group share the same passion to educate the public and promote British farming."

“At the Three Counties show I got chatting to an 80-year-old woman, and she asked me how many women were on my course. I told her it’s around half and half and she was delighted - as she herself, was only one of four in her year when she studied."

“At another event I was talking to an eight-year-old girl who is already working on tractors alongside her dad and was really interested in agricultural engineering – it was incredible!”

Ladies in Pigs Chairwoman, Debbie Wilson said: “Toni has immediately fitted into the Ladies in Pigs (LIPs) team and is such an inspiration to others who are thinking of a career in food and farming regardless of their age or where they come from!

“Our work at LIPs is to raise awareness of the amazing work the British farmers are doing producing the high welfare, local food we can all enjoy.  We also work with schools and colleges across the UK, educating about where food comes from and how to make amazing recipes. They also get to learn about diversification, the food standards logos and the different parts of the pig in fun and interactive ways - older students also hear about how to get into studies or careers in the industry.”

“Ladies in Pigs are always on the lookout for new members to spread the word just like Toni and it’s great work to include on your CV as it is a volunteer role.

“The hard work is rewarded with expenses paid and any overnight stays are covered as well as other benefits.  Anyone interested in joining can check out the website at www.ladiesinpigs.co.uk/membership.”

Toni has now just began her industrial placement year – which, unsurprisingly, she is spending with a high-welfare pig farming business, British Quality Pigs -part of Pilgrim's UK- in Norfolk.

After her placement - which she secured via the Pilgrim's Agriculture (BQP) Scholarship at this year's Scholarship Presentation - she will then return to complete her final year of study at Harper Adams, which she has praised for supporting her on her journey into the agricultural sector.

She added: “Studying at Harper has been brilliant, the community is great here. And the one thing that separates Harper from other universities is how willing the lecturers are to help and support you - something I know, from personal and my friends’ experiences, is not the case at other universities.”