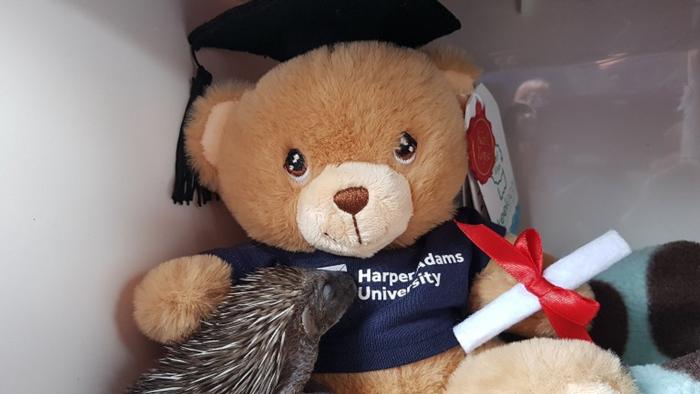 Harper the Hedgehog with a graduation memento from his namesake University

An animal rescue centre set up by a Harper Adams alumna proved so successful that she found herself heading to her graduation with a very special guest in tow.

Genevieve Tomlinson was set to return to Harper Adams from Cheriton Bishop in Devon for her Graduation Celebration Ceremony when a very young – and very dehydrated – baby hedgehog was brought into the hedgehog hospital where she works.

She explained: “He was less than a week old and was severely dehydrated and was suffering with fly strike with no mum in sight.

“He was incredibly lucky to have been found as he wouldn't have survived even a couple more hours.

“I got into hedgehog rehabilitation during my time as a Veterinary Nurse and have been looking after them as a hobby for the last six years.

“Then in 2020 we opened The Hog Hospital and started doing it officially and receiving hedgehogs from members of the public and vet practices and so this is how he ended up with us.

“Initially it was very tough getting him stable, but with fluids on board, a toasty warm bed and one to two hourly feeds around the clock, he slowly started to recover.”

With a qualification as a Veterinary Nurse already secured, Genevieve had been studying at Harper Adams for her Postgraduate Diploma in Veterinary Physiotherapy as a part time student – and was set to mark the achievement at the University.

However, her new patient needed round the clock care.

She added: “Three days after he arrived, I was due to attend my graduation at Harper Adams - which had been delayed due to covid - and because this tiny hog needed feeds, toileting and monitoring every one to two hours, he came too!”

With the aid of a specialist incubator, Genevieve and her family were able to take the hedgehog with them to Shropshire – making sure he was kept safe and healthy while Genevieve attended her special day.

Genevieve is now using her studies in her own physiotherapy business for animals in Devon and Cornwall – and intends to develop this into her full-time career.

She added: “I was already qualified as a Veterinary Nurse and had always wanted to further train in rehabilitation and physiotherapy, so when I discovered that the PgDip at Harper would enable me to do this, I jumped at the chance and never looked back.

“Harper Adams is such a brilliant work environment with excellent facilities and fantastic student opportunities – and now I can combine my existing career as a Veterinary Nurse with a new career in Veterinary Physiotherapy.

“Finally graduating was the most amazing feeling ever after such a rocky few years! There were so many times during the course that I felt I would never get through it and so to finally have a beautiful day at Harper celebrating as a fully qualified physio was simply fantastic.”

With such a unique tale to tell about her Graduation, Genevieve knew that there was only one name which could be given to her rescued hedgehog – who is now preparing for release later this summer.

She added: “Because of this, we decided that he just had to be named Harper!

“Four weeks on and he is doing really well - he is now living in his own house in our hog hospital and is getting bigger by the day.

“Once he has reached around 400g he will move outside into one of our soft release pens and prepare to be released into the wide world once he is fully independent.” 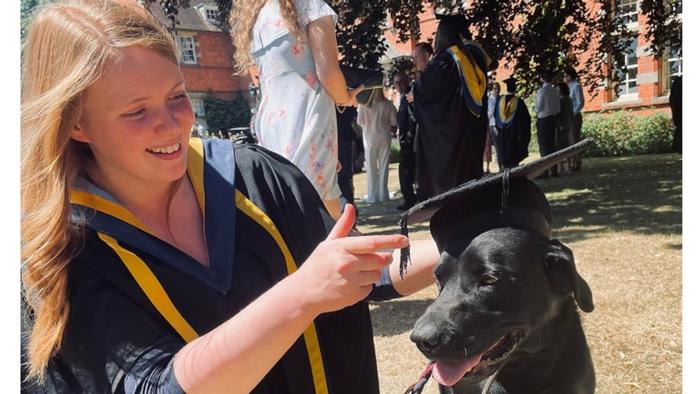 Genevieve on the Harper Adams campus after her graduation ceremony