"It has been the best decision I ever made – the opportunities I’ve gotten as a result have been unbelievable. That’s key, really – it’s not only the people here, but the opportunities that being at Harper gives you – no other place opens the doors into industry that Harper Adams does.” 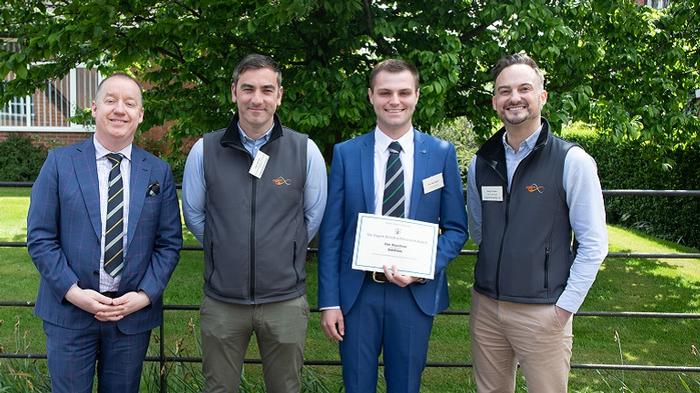 A student whose time at Harper Adams has seen him winning scholarships and awards – as well as working with a global company – has praised the University for making its students industry ready.

BSc (Hons) Agriculture student Tim Davidson, from Kilrea in County Londonderry, was unsure at first about studying at Harper Adams as he did not have as strong an agricultural background as some of his peers.

However, since beginning his studies with a Foundation degree, before transferring over to his current undergraduate course, Tim has secured a British Poultry Council Scholarship and a year’s placement at Aviagen – for which he won a placement award - as well as an Oxford Farming Conference Scholarship.

Talking about his decision to study at Harper Adams, Tim said: “I remember, I applied from Northern Ireland for the course and came over for an interview – and once I experienced the Harper campus and atmosphere, that was my decision already made.”

“It has been the best decision I ever made – the opportunities I’ve gotten as a result have been unbelievable.”

“That’s key, really – it’s not only the people here, but the opportunities that being at Harper gives you – no other place opens the doors into industry that Harper Adams does.”

Among the opportunities which Tim has seized is his placement at Aviagen – which saw him undertake roles with the company across the country.

He said: “I was in Scotland for six months – we had our own van and travelled to a new farm every couple of weeks. Going from grow sites to rearing and lay, it was a fantastic experience. We got on really well getting stuck in working alongside the farm staff and management, importantly there was always a laugh to be had. Getting to work within the pedigree breeding programs and farms was a fantastic opportunity to see the work that goes into produce such high-quality progeny.”

“After that, I moved to Stratford Upon Avon for three months, working at the Aviagen hatchery there. It was tricky finding places to stay, but through friends of friends we managed to rent somewhere – I was sharing with my friend Joe, who’s in his final year of an Animal Production course at Harper.

“Finding somewhere to stay was the only difficult thing about it though – it was a fantastic experience and with a leading company in the poultry industry.”

Upon completion of his placement, Tim was given a 100 percent employability rating by Aviagen – and on his return to Harper Adams to continue his studies, he was selected as the winner of the 2022 Cogent Breeding Ltd Placement award.

The awards ceremony not only offered Tim – who is a keen member of the Harper Ireland student society - a chance to network with leading industry figures, but also a further picture opportunity with Harper Adams Vice-Chancellor Professor Ken Sloan, who Tim had met at the first annual Harper Ireland dinner to be held since Covid restrictions were lifted.

He added: “Winning the award was great – and because I had gotten pictures taken for the Harper Ireland society, and one for the Scholarship too, I was chatting to Ken after the ceremony, and he was joking I’m one of the students he’s had the most pictures taken with since he started his Vice-Chancellor role at Harper!”

A keen advocate of seizing the opportunities a Harper Adams degree offers, Tim was also selected as one of three students from Harper Adams to attend this year’s Oxford Farming Conference in January.

He added: “I got to visit the McDonald’s headquarters in London and meet other students from across the UK and Ireland. We had development workshops and talks from ABP and other key companies in the beef industry. I was then able to attend the Conference – though that ultimately ended up online because of Covid.

“All being well, I want to try and attend in person next year!”

As Tim prepares to begin his final year at Harper, he believes that making the decision to study in England has proved crucial not only for his current degree – but also for his future career.

He added: “The people I know from home who have come here, always say how far they have got with their Harper degrees – just having the words ‘Harper Adams’ on that bit of paper makes a difference because of the reputation it has.”

“One thing I think I would tell people is that you don’t need to have a farm at home to study agriculture at Harper Adams – or to take advantage of its links with industry!”