“I am excited to travel hopefully to both New Zealand and Australia to see first-hand their sheep systems, with a focus on outwintering techniques. I am sure it will give me extra motivation as I complete my final year at Harper Adams University.” 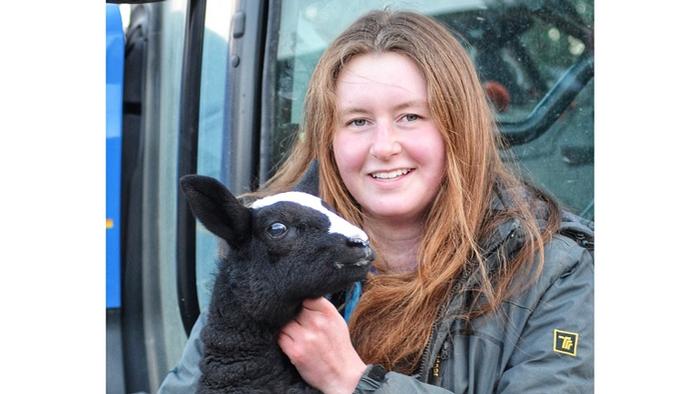 A Harper Adams student will study sheep production in New Zealand after securing one of this year’s Samuel Wharry Memorial Awards for the Next Generation.

Final year Bsc (Hons) Agriculture with Animal Science student Lucy Griffiths, from Presteigne, Powys, was one of two winners of the National Sheep Association award. Her prize comes in the form of a generous £2,750 travel bursary to support a study trip to explore the application of science in sheep production.

The bursaries are made possible by funding from NSA alongside the Company of the Merchants of the Staple of England (the Staple).

After being shortlisted from many high calibre applications for the award, Lucy and her fellow winner Perry Parkinson both impressed a panel of judges including NSA and industry representatives to finally be selected as recipients of the bursaries.

The panel was led by Stephen Fell, Staple representative and a sheep breeder from North Yorkshire. He was joined by Dr Philip Skuce from Moredun, Edward Adamson from NSA Northern Ireland Region and Kate Hovers, vet and NSA Cymru/Wales Region Chair.

Mr Fell said: “The Company of the Merchants of the Staple of England is once again delighted to be sponsoring the NSA Samuel Wharry Memorial Award.

“This is a great opportunity for two people from our sheep industry to travel and broaden their minds in other countries. The successful recipients this year, Perry and Lucy, both interviewed very well and their chosen topics, will certainly produce reports of real topical interest.”

The awards are given in memory of Samuel Wharry of Carnlough, County Antrim, who was NSA Chairman when he died suddenly in May 2017, aged just 56.

As an advocate of science and technology, particularly relating to genetics, these bursaries are given in Samuel’s memory to ensure his enthusiasm, curiosity and practical nature live on.

“After the world of travel was closed off for so long due to the covid pandemic, it is especially pleasing to be able to award the bursaries to Lucy and Perry this year. All at NSA and the Staple are excited to be part of their journeys and wish them the very best with their studies.”

Lucy and Perry are now in the initial stages of planning their study trips – with both hoping to visit New Zealand.

Lucy said: “It is a privilege to be chosen as a recipient and to represent young UK sheep farmers.

“I am excited to travel hopefully to both New Zealand and Australia to see first-hand their sheep systems, with a focus on outwintering techniques. I am sure it will give me extra motivation as I complete my final year at Harper Adams University.”

Lucy works alongside her family on their mixed farm in mid-Wales, where they currently outwinter breeding ewes and lambs on forage crops as part of the crop rotation.

Alongside her study trip, the topic is something she is also examining during her final year Honours Research Project over the next few months at Harper Adams.

She added: “I was drawn to study at Harper Adams because the campus was rural, and we have access to the university farm which is also going to prove invaluable for my dissertation – again focused on sheep!

“I also wanted to be able to back up a degree with new practical experience - which I gained through a placement year at Daylesford Organic.

“I have really enjoyed my time at Harper so far - I've met a lot of like-minded people, been given many opportunities and learnt something new along the way!”