“I am delighted with the success of three engineering students being presented with awards from CLAAS Foundation for their final year dissertations - in the face of stiff competition from candidates at universities across the globe." 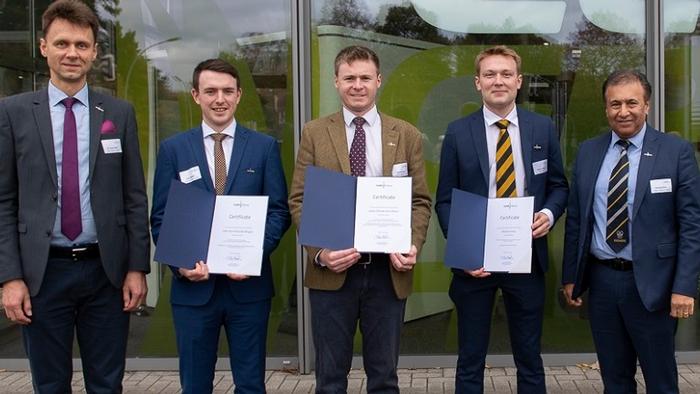 Scholars from Harper Adams University have been named as prizewinners at the CLAAS Foundation’s prestigious annual ceremony.

In total, three students from the University were honoured at the awards, taking home prizes worth €7,800 between them.

Each were given their awards at a ceremony at the CLAAS Greenhouse in Harsewinkel, Germany.

The CLAAS Foundation was founded in 1999 and has since awarded the Helmut Claas scholarships, bonus prizes and international prizes on an annual basis. The prizes are designed to mark the achievements of students from agricultural and engineering faculties, in recognition of their outstanding final theses.

Chair of the Board of Trustees since 2021, Cathrina Claas-Mühlhäuser, said she was delighted to welcome another batch of young professionals – including participants from Africa and from seven European countries, including the Harper Adams students from the UK.

She added: “Talented youngsters from the areas of agriculture and engineering are vital to overcome the challenges we are currently facing - and will continue to face going forward.”

Harper Adams student Richard Geary won third prize in the Scholarships for his thesis, entitled Maize Belongs to the Farmer, Not the Field. This investigated the optimisation of harvesting technology – and winning the prize earned him a grant of €4,800.

Richard – currently in the final year of his MEng Agricultural Engineering degree – spent his placement year at Claas in Germany on placement after securing a CLAAS Scholarship.

John – who secured an Avara British Poultry Council scholarship during his studies at Harper Adams - explored the development of a low-cost imaging system to analyse the behaviour of poultry in small Kenyan pens in his thesis.

The CLAAS award was the second time this work had secured a prize after he was named winner of Institution of Agricultural Engineers CNH Industrial Undergraduate Award 2021 earlier this year.

Mr Chima said: “I am delighted with the success of our three engineering students who were presented with awards from the CLAAS Foundation for their final year dissertations - in the face of stiff competition from candidates at universities across the globe.

“CLAAS is a leading global manufacturer of innovative agricultural engineering equipment that has a longstanding relationship with Harper Adams, providing valuable support in teaching, learning, and applied research as well as knowledge transfer.

“The award of the Helmut Claas Scholarship prize is a testament to the ethos of engineering programmes delivered by the University that are applied in nature, and very much aligned to meeting present and future challenges faced by the industry and the farming sector as a whole.”