“It is essential that we ‘speed up’ the adoption of relevant science if we are to respond to Government priorities and take advantage of market opportunities at home and abroad. The Government needs to take these recommendations very seriously indeed.” 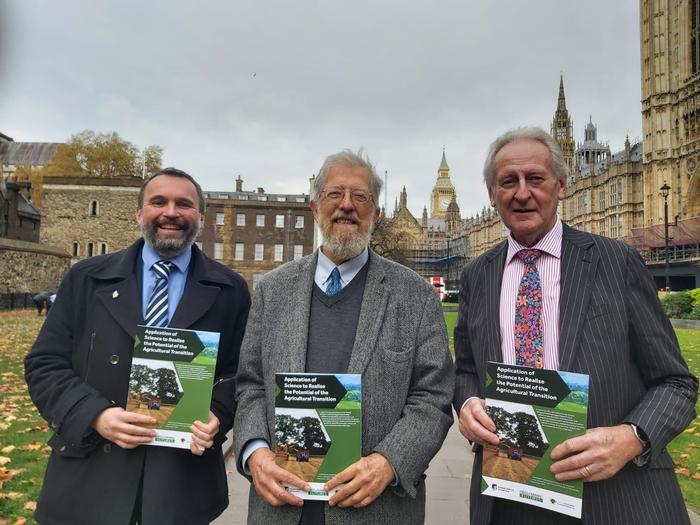 An action plan to boost productivity and innovation in British agriculture was launched today at the House of Lords.

“Britain has some of the best scientists in the world, but unfortunately that science is often slow to be applied at the farm level,” said Lord Curry of Kirkharle, who chaired the Application of Science working group.

The Application of Science report examines exactly why UK agriculture productivity has lagged behind other nations, and puts forward a series of recommendations needed to deliver science more quickly and surely to tackle food security, Net Zero and biodiversity challenges where necessary.

The working group grew out of a webinar earlier this year, where Food and Farming Futures and Harper Adams University’s School of Sustainable Food and Farming asked industry, academia and policy representatives to consider how the application of science could be best delivered to ensure a just agricultural transition in the United Kingdom in response to the Agricultural Act 2020, climate change and the reality of a war in Europe with the ongoing conflict in Ukraine.

One of the key insights from the report is that the path from scientific discovery to on-farm application in the UK is fragmented. Unlike France, Germany, US and most other industrialised countries, the UK does not have a public or private entity clearly responsible for application of science in practical agriculture.

“Everyone in the working group agrees that food security must be treated by the government as a public good, worthy of being supported with public money, just as much as biodiversity and carbon net zero,” said Professor James Lowenberg-DeBoer, the Elizabeth Creak Chair of Agri-Tech Economics at Harper Adams University and lead author of the report.

“Some other aspects of the report were intensely debated, but it was obvious to everyone that food security is essential for a functional modern society.”

The report seeks to tackle these challenges, with a series of recommendations for policy makers and agricultural leaders which aim to tackle the strategies and structures holding British agriculture back.

Among the report’s key recommendations are:

Professor Michael Lee, said: “From conflict in Europe to climate change, UK agriculture is facing a series of challenges on a scale unparalleled in recent times.

“Responding to these challenges needs action from all of us – from the farmer in the field to our academics at universities like Harper Adams driving the latest research, and from the industries who need the best talent to the policymakers whose decisions set the conditions for growth.

“This report sets a route map for each of us to follow – and I am very grateful to Lord Curry for both working with the School of Sustainable Food and Farming at Harper Adams on its production, and for helping us launch it in Parliament.”

The report was launched this morning at an event in the House of Lords with a select audience of more than 50 guests, including The Rt Hon Mark Spencer MP, Minister of State for Food, Farming and Fisheries, and policymakers who will now consider its contents.

Lord Curry added: “This is a critical moment for the agricultural sector as we adjust to new Government policies in a post-Brexit world.

“It is essential that we ‘speed up’ the adoption of relevant science if we are to respond to Government priorities and take advantage of market opportunities at home and abroad.

“The Government needs to take these recommendations very seriously indeed.”

The Minister noted that, in his maiden speech as an MP, he had raised the same issue of food security’s importance as covered in the report.

Noting attendees had come from across the country to attend, he spoke of some of the ways in which the Government was answering the issues the report raised, and suggested further action will follow, based on the importance of the recommendations adding: “What a fantastic report – it is quite challenging for Government, and there is a lot for us to digest and absorb.”