"Having that focus on going into industry and doing a year’s placement was very important, as my experience shows – when I was choosing universities, I never thought I would have worked for an F1 team before I graduated.” 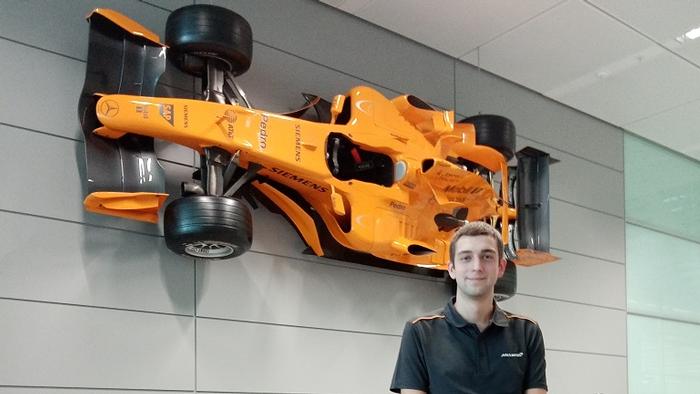 A lifelong love of engineering – coupled with the experience and confidence his placement year gave him - put one Harper Adams student in pole position for an internship with F1 giants McLaren.

MEng Automotive Engineering (Off Highway) student Matthew Torok, from Dewlish in Dorset, always knew he wanted to be an engineer. He explained: “The passion started with my dad’s classic car – when he needed some extra help doing work on it. I got an interest in engineering from there, wanting to know ‘what does it do?’ Even before that, there was Lego Technics – I really enjoyed building the car but then taking it apart and seeing what else I could do.”

As his interests developed, Matthew began following other engineering pathways – such as racing ride-on lawnmowers, including ones which he fabricated and built himself - before racing them at speeds of more than 40 miles per hour on a dedicated track in the Dorset countryside.

While at school he also involved himself in the Land Rover 4x4 in Schools challenge – which he initially took part in as a competitor, discovering Harper Adams along the way.

He added: “When I was considering uni, Harper Adams wasn’t on my radar, but then I started competing in the 4x4 schools challenge.

“I saw some banners advertising Harper at one of the events and it looked like they did lots of interesting things that drew me in – and they had a focus on making you an industry ready engineer.”

After visiting Harper, the University’s focus on hands-on, practical learning appealed to the engineer in Matthew.

He explained: “Every university that offers engineering is going to have the tech, but looking at the Harper workshop when I first visited, it was obvious that the students would get hands on – and obviously, there was a Motorsport club.

“The placement year was another draw – having that focus on going into industry and doing a year’s placement was very important, as my experience shows – when I was choosing universities, I never thought I would have worked for an F1 team before I graduated.”

The decisive steps in Matthew’s journey from Lego Technics to F1 were initially forged during his placement year at Peregrine MLS in Hampshire.

He said: “Working with McLaren was effectively to do with a link I made during my placement year, where I was working for a company as a Cad Cam Engineer, manufacturing parts.”

“A lot of that work was on classic F1 cars, and it was through a contact there that the connection was made – there was even a suggestion that they might be interested in talking to me after the placement.”

“Though I had already completed my actual placement, I spoke with McLaren and said, essentially, ‘Can I come work with you? Here is my experience, and here are some of the components I have manufactured!”

Having engineered the discussion, Matthew’s knowledge and CV were enough to land him an eleven-week placement – and he found himself making his way to the company’s headquarters in Woking, Surrey, about to fulfil a boyhood dream.

He added: “It was really cool going there for my first day – I was very excited about it, particularly as F1 is seen as the pinnacle of motorsport. Driving up to the gatehouse was very surreal. As was going to lunch; you pass all these amazing classic F1 cars on the boulevard – vehicles of great historical significance.”

“It is like another world – but it was an amazing experience. You would find yourself having lunch sometimes alongside one of the drivers – you’d look up and Lando Norris would be there.”

Yet despite mingling with some of the top names at the company, Matthew says his experience at McLaren was notable for the respect and responsibility he was given.

He added: “I went to several of the team debrief sessions after the races. You are treated like a member of the team – you were just another engineer.

“I would get key members of the McLaren team coming in, asking me ‘can you just manufacture this for us?’”

After enjoying a summer at the heart of motorsport, Matthew has now returned to Harper Adams for his final year of studies – and to weigh up the next steps in his career.

He added: “If I hadn’t done a placement year, I wouldn’t have had the contacts, the experience, the competence or the ability to have taken up the role I did with McLaren.” 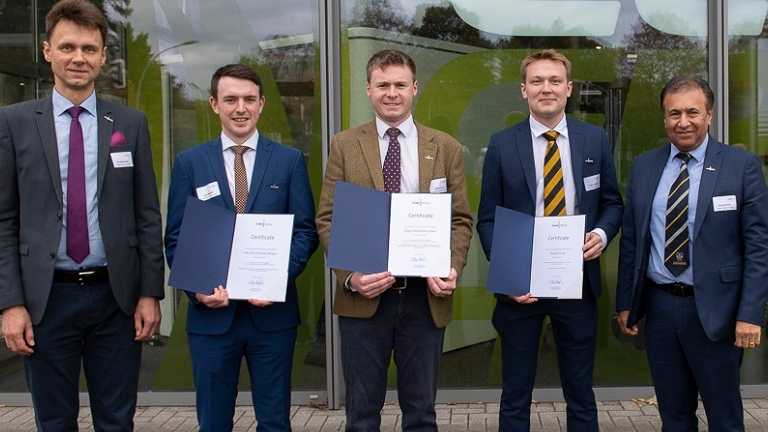