“It’s a great honour to win, and nice to have recognition for the hard work we have put in. It gives a boost to staff morale as we know we are doing a really good job and being recognised nationally.” 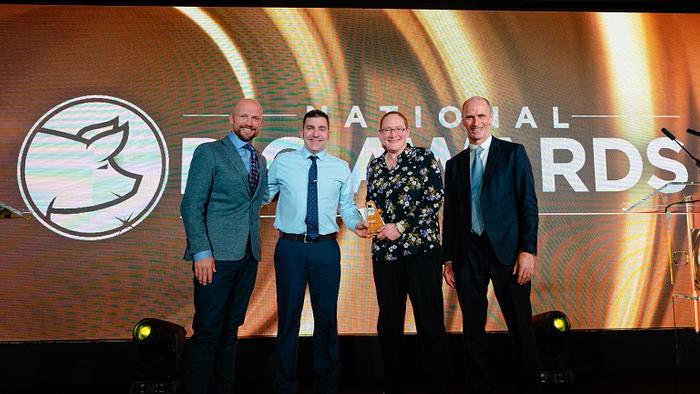 Pig and Poultry Sector Manager, Matt Swaine, Deputy Sector Manager Sarah Icely and Technical Science Officers Michael Holdcroft and Joshua Osmond were there to receive the award at the ceremony in London.

Speaking on behalf of the team, Sarah said: “It’s a great honour to win, and nice to have recognition for the hard work we have put in. It gives a boost to staff morale as we know we are doing a really good job and being recognised nationally.”

“Really, it’s the sows that have done all the work though. It’s good for team bonding and we’re already thinking about what we could enter next year!”

In total, 15 National Pig Awards were handed out on the night. Judges explained how they had been impressed by this year’s entries, in terms of both quantity and quality, after a difficult year for the industry.

Entrants were described as a ‘real testament to the resilience of the industry’ by head judge Stewart Houston.

The award is the third time in recent years  that the team’s work has been celebrated at the awards - in 2019, they also won Indoor Producer and overall Producer of the Year, and Matt won Stockperson of the Year in 2021.

Sarah added: “It’s all down to teamwork, we have a common goal to succeed and make the unit the best we can.”

The team also share their award-winning knowledge with the University’s students during a series of practical sessions throughout the year, and work alongside final year students on their Honours Research Projects.

Sarah explained: “Students have the opportunity to sign up for skills sessions working with us in feeding sows, pregnancy scanning, vaccinating, weighing, weaning, processing piglets. These sessions are always really popular.”

“We do a lot of tutorials, general pig ones and in areas such as animal health, reproduction, environment,” she added.

“We have several students doing HRPs each year, usually in nutrition or behaviour.”