“I think as an industry we’re in a very good place in terms of putting our own opinions out there and I’m lucky enough to be able to have a bit of a voice of my own to change things.” 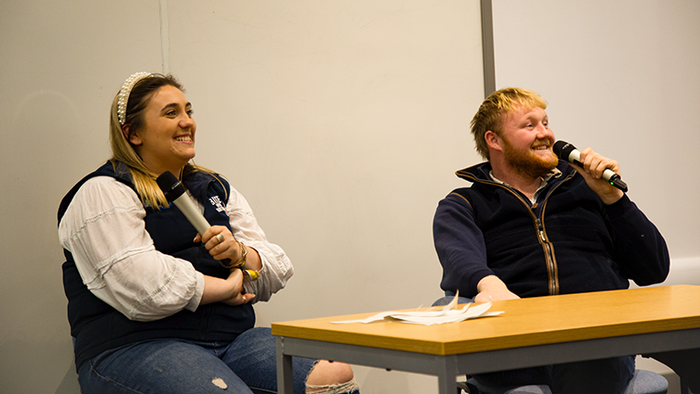 Students at Harper Adams University were given the chance to quiz agricultural contractor – and Clarkson’s Farm TV star – Kaleb Cooper at a hugely popular event.

Having set up as an agricultural contractor in Oxfordshire, Kaleb found fame through his appearances with Jeremy Clarkson on Amazon Prime’s breakout hit Clarkson’s Farm – with the pair’s disagreements over all things agricultural at the heart of the hit show.

Since the show’s debut in June last year, viewers have watched as Jeremy tries to run a 400Ha Cotswold farm – which he renamed Diddly Squat due to his lack of farming experience. Kaleb’s guidance throughout the show made him such a hit for viewers that he was nominated for this year’s National Television Awards in the Expert category, alongside Sir David Attenborough and eventual winner Martin Lewis.

During his visit to Harper, Kaleb both signed copies of his new Sunday Times bestseller, The World According to Kaleb, and answered questions posed by Harper Adams students and staff during his hour-long interview.

One such question asked Kaleb how he felt being able to share his farming experience to a wider audience - perhaps in the hopes of introducing a whole new talent pool to agriculture. He said: “I absolutely love [sharing my experiences] because you’re showing the world what I love doing most – I mean everyone now knows what a tramline is!

“I think as an industry we’re in a very good place in terms of putting our own opinions out there and I’m lucky enough to be able to have a bit of a voice of my own to change things.”

He added: “It’s been a pleasure – thank you very much for having me here at Harper.”

Speaking after the event, Jess said: “It was great to welcome Kaleb to Harper – he was certainly a hit with our students, with all the tickets for the event snapped up straight after it was announced.

“As you might expect from a Harper Adams audience, we put his expertise to the test during our chat – but just as he does with Jeremy Clarkson, he more than rose to the challenge.

“I’d like to thank Kaleb for coming along, for the time he spent chatting with our staff and students, and for making this a great Students’ Union event.”