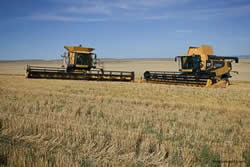 Harper Adams University College was pleased to show its new and improved facilities to two distinguished visitors from the Claas Company Group Headquarters in Harsewinkel, Germany.

Mr Helmut Claas, Group Chairman, and Dr Hermann Garbers, Director of Research and Development, were welcomed by Principal, Professor Wynne Jones, before being taken on a tour of the new farm buildings, the Engineering Department, and library. They also took a ride round the university college’s off-road track.

Dr Peter Darkins, from the Engineering Department, said the visitors had both enjoyed the four-hour visit. “Mr Claas expressed great interest in the diversity and quality of the work undertaken by the engineering students at Harper Adams. While there is a strong link with the UK Marketing division of Claas based at Saxham, both he and Dr Garbers are looking forward to developing a closer working relationship with the Harper Adams Engineering Department in the future.

“Despite being the Easter holidays, many of the final year students attended and had an opportunity to present their final year projects to Dr Garbers and Mr Claas. Also present were students who had been awarded prizes in 2003 and 2004 at the annual Helmut Claas-Scholarship which is aimed at encouraging young engineers to develop deeper interests in agricultural engineering as well as developing further stimulating contact with this leader in the field of agricultural engineering.”

The visitors were particularly interested in new facilities within the Engineering Department and developments on the College Farm, added Dr Darkins. “The Engineering Department has incorporated several new facilities over the past two years to accommodate the new courses such as Off Road Vehicle Design (ORVD) and to address problems from industry that have arisen from product development and from European legislation such as Whole Body Vibration.

“The farm has been working for some time on a Biomass fuelled combined heating and power system and a new unit is scheduled for next year. There is also a new anaerobic slurry tank that has been designed to cope with proposed changes in legislation. The unit is the first of its type in the UK and has a capacity of 5000m3.”