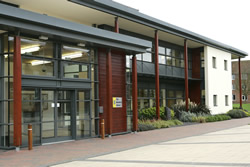 The QAA concluded that ‘broad confidence’ could be placed in the management of the quality of the programmes and the academic standards of the awards at Harper Adams. In particular the QAA praised: the University College’s links with employers and professional bodies, the way in which industrial placements for students are managed, supported and integrated within the curriculum and the way in which Harper Adams’ student focused approach supports a positive learning experience.

“The excellent audit results have crowned another highly successful year for us at Harper Adams,” explains Professor Wynne Jones, Principal at Harper Adams. “I am proud of the hard work and committed professional contribution of all the staff which has helped ensure that Harper Adams is performing at the highest standard as verified by this important audit.”

To arrive at their conclusions, the Audit team spoke to members of staff and students throughout the University College, reviewed students’ work and considered a wide range of documents relating to the way in which Harper Adams manages the academic aspects of its provision.

The outstanding report results follow the award of more than £1.9 million to Harper Adams by the Higher Education Funding Council, to establish a Centre for Excellence in Teaching and Learning. This is only one of 74 such centres in the whole of England and the only one for the land-based sector.

The QAA report also underlines the quality of the student experience at Harper Adams, as confirmed by the results of the recent National Student Survey. The survey, which was completed by more than 170,000 students nationwide, found that students at Harper Adams were ranked as the fifth most satisfied with their institution in the UK.