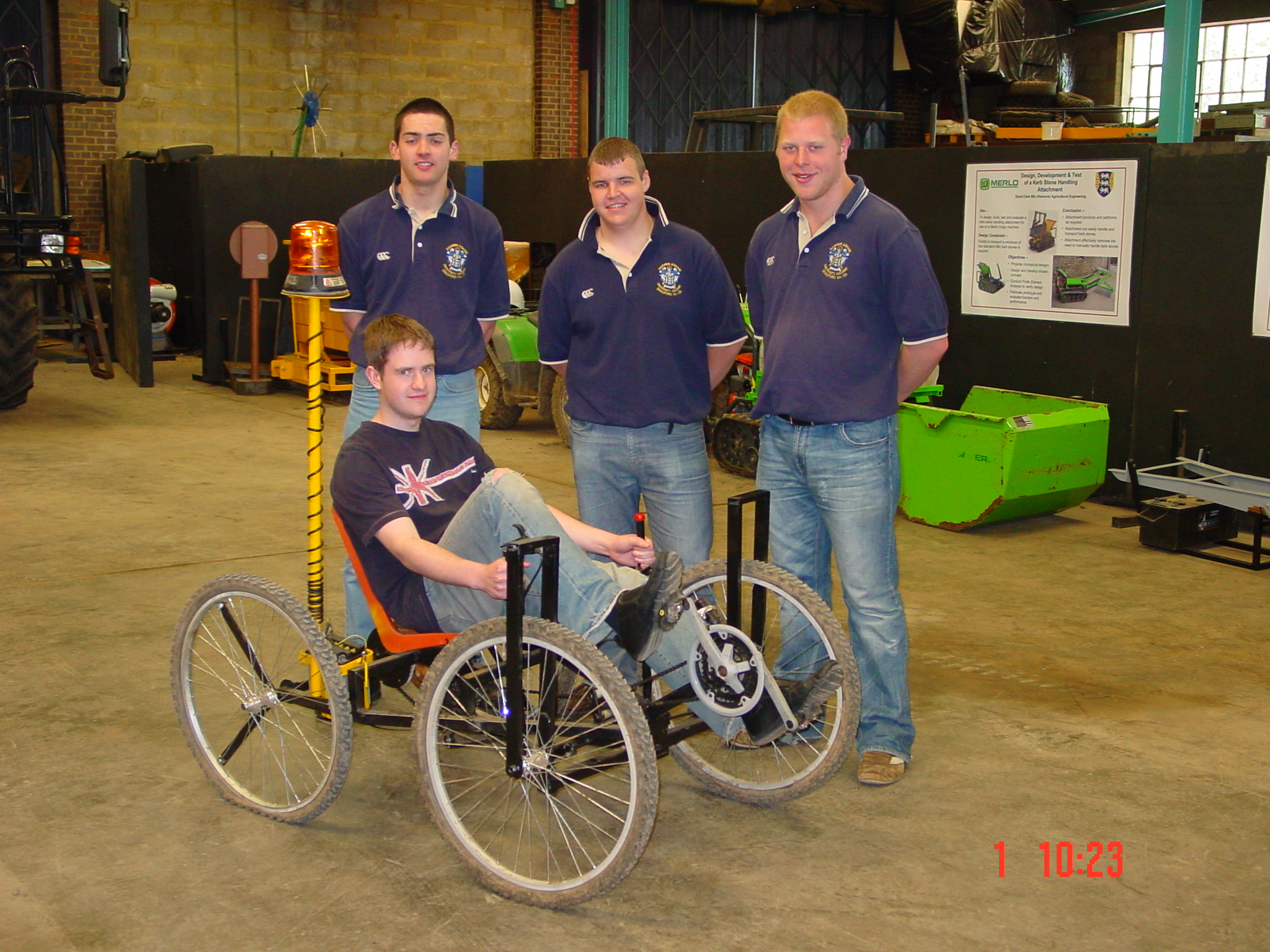 TEAMS of young engineers at Harper Adams University College have been battling it out to complete the Human Powered Off-Road Vehicle Design and Build Exercise.

Last month, seven teams completed nearly 23 weeks of work to design, build and develop human powered Off-Road Vehicles capable of traversing the “long hill” on the Harper Adams off-road test track.
The task was for each team to drive their vehicles over the hill, carry the vehicle round the base of the hill and then with a new driver cross the hill again.
The vehicles ranged from a simple three wheeler with a single drive ratio to a tracked vehicle with questionable steering characteristics. One machine sported 147 possible drive ratios and another 105, even if a spanner was required to select any one of five ranges.
Geoff Wakeham, Consultant to the Engineering Group, said: “In spite of a series of failures to the commercial components the students seemed to find the whole exercise great fun.  The aim of taking a simple product specification through to a prototype machine demonstrated that a pirouetting 3D model on the computer is a long way from a working and robust product.”
“The students did however get the opportunity to go through the whole process and get both their technical and practical skills stretched.”
The trial started with the team ‘AEMM for the stars’ going like a rocket until drive failure produced an early withdrawal. A second run produced a creditable 2 minutes 26 seconds time. ‘Belle Ends’ managed to get further up the first hill before suffering a similar fate. Their second run was little better as their single gear ratio made the climb almost impossible before they escaped down the side of the hill.  ‘KISS’ failed as a design principle.
The tracked ‘Blind Deere’ was the tortoise of the race but quickly sank into a mud hole due to its determination to stick to a straight line. On its second run with assistance at the edge of disaster and liquid refreshment they managed to get over the hill but ran out of time after five minutes of furious peddling.
‘Dirt Track Riders’ then showed that it was possible to complete the trial in style with a time of one minute and twenty eight seconds. A later second run produced a time of two minutes and eighteen seconds. The drive was close to its design limits but survived the ordeal.
‘Landy Rovers’, fitted with a roll cage, suffered early disaster when they slipped sideways into a deep pit and demonstrated that bicycle wheels are not designed to take high side loads. The wheels were realigned by foot but on a second run quickly failed again
‘No Name’ managed a creditable run of 1minutes 45 seconds in spite of a jumping drive chain. Their second run showed an improved time of eighty eight seconds, one of the best of the day.
The ‘Tour de Mound’ team managed a flying start but gear change failure dashed their hopes.  A second run clocked up a time of 122 seconds with excessive external assistance.
Mr Wakeham added: “The winners of the trophy were the team with No Name, and members Peter Nicholas Brown, Llion Wyn Davies, Gwion Tydu Hughes, and Jonathan Andrew Sykes. The students had an aggregate time of 202 seconds, 12% faster than the next team.
“However, the overall winners were all the students who took part with so much enthusiasm.”