Harper Adams' student called up for his country 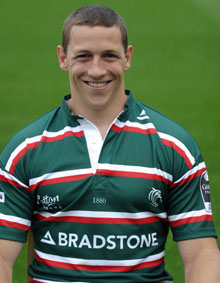 A THRILLED former student from Harper Adams University College has the honour of being called up to represent his country in international rugby.

Scott Bemand, who graduated in 2000 from the prestigious Shropshire university college in HND Agriculture, has been asked to join the world-renowned England squad when it tours Australia in June.

Scott, originally from Leominster, will left for the tour on Monday (May 29th) which sees the team face Australia in their first test on June 11th in Melbourne and again on June 17th in Sydney.

Speaking after Scott had left for the trip his father, Kenneth Bemand, said Scott’s family and friends will be cheering him on.

“Scott is over the moon about being selected to represent his country and we are 100 per cent behind him.

“Representing his country has been a dream ever since he started playing rugby and it is fabulous to see it come to fruition.

“He was ready and raring to go and has been on a build-up to it since he was selected about a fortnight ago.

“But he has always maintained that it is important to get a good education under his belt as well and he keeps telling me he would like to come home to the farm once he has completed his rugby career – but we hope that is not for a long time yet.“

Before coming to Harper Adams University College, Scrum-half Scott was educated at the Bishop of Hereford's Bluecoat School.

The 27-year-old played for Luctonians First XV as an 18-year-old, before moving to Moseley Colts in 1997/98, the season they won the National Colts Cup in an unbeaten season. He made his debut in the Allied Dunbar Premiership Two for Moseley in 1998, and was selected for England Students whilst with the club and then went on to captain the Students the following season, having previously represented England and The Midlands at Colts level, and winning the County Colts championship at Twickenham with the North Midlands in December 1997.

Scott, who stands at 1.80 metres, signed for NEC Harlequins in the summer of 2001, and went on to make 30 Premiership appearances for the club, scoring two tries - one on his Premiership debut against Bristol at the Stoop. His last game for the team was the Parker Pen Cup Final in May when he helped the team to a 27-26 win over French club Montferrand.

Since making a debut with Leicester in May 2004, he has competed with Harry Ellis as the regular scrum half for the first XV, and captained the Tigers' Extras during their successful Zurich A League campaign. Scott, who weighs 85 kg, also scored Tigers' only try in the Zurich Premiership Final against London Wasps at Twickenham in May. An all-round sportsman, Scott played junior County Cricket from Under-13 to Under-16 level.

Professor Wynne Jones, Principal of Harper Adams, said: “We at Harper Adams have always prided ourselves in a number of sports, including rugby, hockey and shooting.We are thrilled when students, both past and present decide to take their passions further.

“I wish Scott every success in the future with both his rugby recognition and any educational and vocational qualifications.”