Glitz and Glamour at Harper Adams 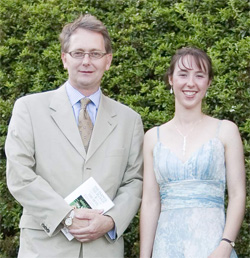 A NIGHT of glitz and glamour was the focus of a celebration at Harper Adams University College last weekend.

Supporters of the Fordhall Community Land Initiative celebrated with brother and sister team, Charlotte and Ben Hollins – who saved their family farm by placing it into community ownership just three weeks ago.

The pair took on the daunting task of saving the 128 acres of grassland – which had been tended by their family for three generations.

And last month, after selling non-profit making shares to over 7000 people and receiving a loan from Triodos Bank the pair raised the £800,000 needed to save the land by July 1st; Fordhall is now owned by people.

The celebratory Dinner and Dance event, with food sponsored by Waitrose, at the university college marked the milestone but also looked to the challenges ahead – with guest speaker Tom Oliver.

Commenting on the event, Charlotte Hollins said: "The event at Harper Adams was the perfect end and the perfect beginning to the campaign. The local organic produce dinner was fantastic and the dancing energetic.

"We now move Fordhall forward with a new energy and determination. Shares are still available and there is still a lot of work to be done on creating the educational resources on site.

Organic and local food was served at the event, on July 15, and included wines from Shrewsbury’s Wroxeter Roman Vineyard and Tanners, bottled water from Wenlock Edge along with goats cheese from Neals Yard Creamery in Hereford, butter from The Dairy House in Weobley, strawberries from Bearstone Fruit Farm in Napley Heath, cake from Gills Puddings and gingerbread from Image on Food, both in Market Drayton.

Speaking at the event, Tom Oliver, Head of Rural Policy, Campaign for the Protection of Rural England (CPRE), said: "It’s not often that there’s a chance to celebrate something that is almost too good to be true. But in the case of the saving of Fordhall Farm, it is possible to do this.

“Thanks to the commitment of Charlotte and Ben Hollins, Sophie Hopkins and their army of supporters, the farm which has been managed by their family for generations is now permanently secure. It has a future at a time when the prospects for smaller traditional farms are threatened as never before. Something has happened that is almost too good to be true; but happened it has.

"What’s even more inspiring is that there are signs that the example of Fordhall Farm is being used to encourage others right across the country to do the same and set up Community Land Trusts. There is a serious opportunity to give this new idea a momentum. This will allow farms, their landscapes, wildlife and the local people who live near them to swim against the tide of standardisation and decline which will otherwise engulf many of them.

“I pledge my support to help this process wherever possible working within CPRE. Charlotte, Ben and Sophie and their advisers have a key part to play in this new advance of the cause of sustainable farming and the protection of the countryside."

Guided walks at the farm followed the evening’s event and offered the opportunity to see Fordhall and learn about the next phase of the project. For more information on the initiative, log onto www.fordhallfarm.com or call 01630 638696.