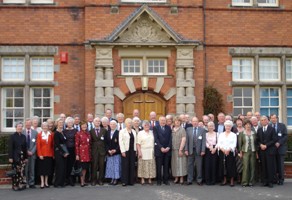 Twenty-seven former students returned to Harper Adams University College this month, 50 years after they first came here to study. The class of 1957-59 travelled from across the UK and from as far a field as the USA, Belgium and Jersey to meet up with old college friends at the Golden Reunion.

The majority were National Diploma in Agriculture (NDA) students whilst the remaining studied for a National Diploma in Poultry (NDP). They all met at the new Aspire Centre - the only Centre for Excellence in Teaching and Learning within an institution that specialises in supporting the needs of the rural economy, land-based and food sectors.

With many opportunities for catching up with old friends, reminiscing and talking of the old days, the students and guests thoroughly enjoyed a Celebratory Dinner in the University College’s Queen Mother Hall.

Other highlights included lunch with Governors of the University College and a tour of the farm and campus. The former students were incredibly impressed with the scale of developments and more recent changes at Harper Adams.

Anthony Firth, a former NDA student said “My wife and I did enjoy the whole event. The organisation by the College was first class which made for a very successful and happy occasion.”

Michael O’Keeffe, another former NDA student said “I am highly impressed by all the facilities and by the motivation expressed by the staff and by the students. The success being achieved in locating work for such an incredibly high proportion of the graduates is evidence of the correct formula for the courses and for the way in which they are taught.”

The reunion was organised by former student Charles Baskerville in association with Julie Brook, Alumni Officer and the Carole Hinks, Conferences Manager at Harper Adams.

The class of 1957-1959 are planning to return for another re-union in 2009 to celebrate the 50th anniversary of the completion of their courses.

The class of 1955-1957 are also returning to the University College for their Golden Reunion in August.