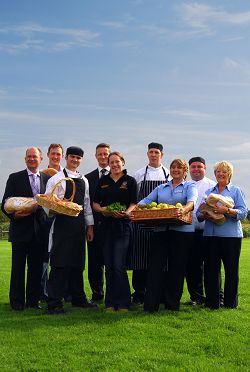 Efforts to create a sustainable food chain at the campus, which has its own 343-hectare farm, have resulted in the University College being short-listed for the Outstanding Contribution to Sustainable Development award.

The winner will be revealed during an awards ceremony on October 23 at the Grosvenor House Hotel, Park Lane, London.

Harper Adams Principal Professor Wynne Jones said: “It is an honour to be in the final of these high-profile awards, which have become an important event in the higher education calendar and which have attracted entries from 90 per cent of the UK’s universities and colleges.

“It is the University College’s mission to provide higher education for the delivery of a sustainable food chain and rural economies, so it is only fitting that we have been working hard to improve the way we source food for use in the Harper Adams Catering Department.”

Like many other HE institutions, Harper Adams has embraced the Fairtrade approach to the sourcing of certain food products, but the Catering Department has taken further steps to promote sustainability whilst reflecting the special place of the University College in the life of UK agriculture.

Since 2007, Catering Manager David Nuttall and Head Chef Wayne Wright have introduced more local food sourcing to reduce ‘food miles’ and support local businesses. To source foods in metres rather than miles, an obvious step was to widen the product range from the University College’s own 343 hectare farm.

Examples include the use of pedigree Lleyn lamb, reared predominantly on grass in sites of high conservation value and pork provided from the farm’s White Cross 'Pietrain' Belgium breed pigs. Eggs are obtained from the 60,000-hen Poultry Unit, whilst herbs are grown on the campus by the Grounds Manager, and supplied throughout the summer months.  In 2009, the catering department hopes to obtain milk from the University College’s new and expanded Dairy Unit.

A number of other products have been sourced from local suppliers. These include cheeses from a national and international award-winning manufacturer Mr Moyden’s, located two miles away in Newport, Shropshire. Milk, cream and butter are provided by Wells Farm Dairies, 7 miles away. Specialist sausages come from Market Drayton and bread from a bakery in Wem, both within 15 miles of the campus.

Fruit and vegetables are supplied by Morning Fresh Farm in Staffordshire. Bottled water, where used, originates from a source on Wenlock Edge, 20 miles away.   Most water, however, comes straight from the University College’s own boreholes which supply the entire campus.

Mr Nuttall said: “In addition to being sustainable, our approach gives us greater control over the quality of our meat; helps the team to develop its food preparation skills; saves money by cutting out the middle man and enables our students to see their food going from farm to plate.”

Coupled with a second major initiative where more than 70% of the department’s waste, including glass, paper, cardboard, cans, plastics and cooking oil, is now recycled, the department has taken major strides to reduce its impact on the environment.

And the “metres not miles” approach is also beating the food price crunch, supporting local food businesses, promoting UK agriculture and successfully raising the profile of the University College’s strategy for sustainability.

This award short-listing builds on Harper Adams’s success in the Sunday Times University Guide 2008, in which it was named the UK’s Best University College, Top for Jobs and Top for Teaching.