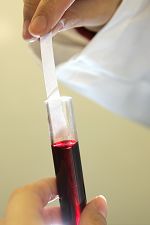 Just a couple of weeks into the new year, Harper Adams has received a second delivery of great news - with newly-published feedback from a government agency revealing that some of the University College’s research has been recognised as “world-leading”.

The welcome news follows hot on the heels of the announcement that Principal Professor Wynne Jones has been awarded an OBE in the New Year Honours.

Harper Adams announced before Christmas that the majority of its Agriculture, Veterinary and Food research had been judged of international importance in the UK-wide 2008 Research Assessment Exercise (RAE).

But more detailed information received from the Higher Education Funding Council for England following the winter break proved that the University College’s performance was better than first thought, with a small portion of its research output falling into the highest category of excellence, equating to “Quality that is world-leading in terms of originality, significance and rigour”.

Professor Andy Cobb, Dean of Academic Affairs, said: “This is wonderful news, and clearly demonstrates the importance and quality of research work carried out by the staff and researchers here at Harper Adams.

“The outcome of the RAE 2008 will encourage Harper Adams researchers to keep up their hard work, and assures current and potential students that the teaching they receive is supported by an impressive and ever-developing knowledge base.”

Research topics cover animal and crop health and nutrition, sustainable farming, agriculture and climate change and the food chain, and is funded mainly by business and government.
The Research Assessment Exercise is conducted jointly by the Higher Education Funding Council for England (HEFCE), the Scottish Funding Council (SFC), the Higher Education Funding Council for Wales (HEFCW) and the Department for Employment and Learning, Northern Ireland (DEL), on behalf of the UK Government.

The primary purpose of the RAE 2008 is to produce quality profiles for each submission of research activity made by institution. The four higher education funding bodies intend to use the quality profiles to determine their grant for research to the institution which they fund with effect from 2009-10.