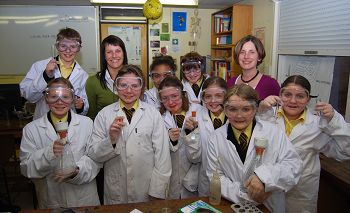 Harper Adams University College has teamed up with schools across Telford & Wrekin to prove that one science department’s waste can be another’s treasure.

At the end of 2008 Harper Adams sent out word that it had lab equipment going free to good homes, and some schools jumped at the chance to stock up their stores.

The Blessed Robert Johnson School,  in Wellington, Telford, for example, took delivery of a huge volume of glassware – including boiling tubes, Buchner flasks and disposable test tubes, as well as a good supply of disposable gloves, described by school science technician Elaina Glasdon as “a godsend”.

She added: “We were desperate for equipment, as there is so little left in the budget after we’ve paid for stationery and text books and other materials, so the offer from Harper Adams was fantastic. The equipment is already being put to good use and we are always on the look out for more.”

Two Harper Adams representatives visited the school this week to see some of the equipment being used by the members of the Science Club, who were trying out methods of making paint.

Victoria Talbot, Laboratories Manager at Harper Adams, explained she and her staff had to have a clear-out before taking delivery of new storage containers.

“Some of this equipment has been recycled for a second time, because a great deal of it came from other universities, which were getting rid of it and said we could take all or nothing. Some of it has never even been used at Harper. Other items were no longer in use due to changes in the way we work. It’s great to see that it can now be put to good use.”

Karen Hughes, the University College’s Waste Management Officer, added: “Harper Adams is committed to recycling, and we could not see this equipment going to waste. We are always keen to work with the local community, and it has been a joy to see school pupils with a passion for science putting the equipment to good use.”