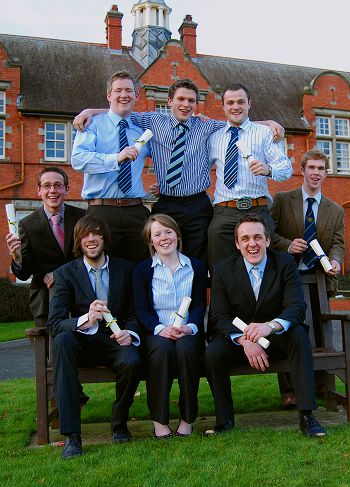 Funds may be running short across the country, but the outlook was far from gloomy at Harper Adams University College this week, when 50 scholarships worth £70,000 during 2008/9 were awarded to students.

The Harper Adams Development Trust Scholarship Presentation attracted sponsors from across the country, although some were kept away by the heavy snowfall that affected most parts.

The students were all very grateful for their awards, which all offer financial support, and some come with industrial placement year employment opportunities.

“I am very grateful to have been selected and frankly overwhelmed that people are willing to support students in such a generous way,” said Jerman scholar Alex Harris, from Warrington.

“I feel honoured to have been selected as a recipient of the scholarship. The financial support has allowed me to complete several short courses which will greatly complement my final degree. I am glad there are such groups, schemes and people out there that are willing to invest in students and their futures,” said Lisbet Rausing scholar Calum Evans, from Saltcoats, Ayrshire.

Agricultural engineering student James Daniel, from Launceston, Cornwall, said: “Receiving the JCB scholarship was a great honour given the prestige of the company.  The 12-month placement will allow me to develop as an engineer and apply all the skills I have learned during my first two years.”

Syngenta scholar Johnny Colman, from Rugeley, Staffordshire, added: “. I am thrilled to have been chosen as a scholar and to be given the opportunity to work for one of the leading agrochemical companies in the world. It will be an excellent stepping stone for my final year at Harper, and into a career.”

And Matthew Williams, from Craven Arms, Shropshire, said: “I feel extremely privileged for receiving the Mercer scholarship as not many students have the opportunity for such a reward.  It is very encouraging to know that there are people within agriculture that are willing to invest in the younger generation to conserve agriculture for the future.”