Another school gets Harper science boost 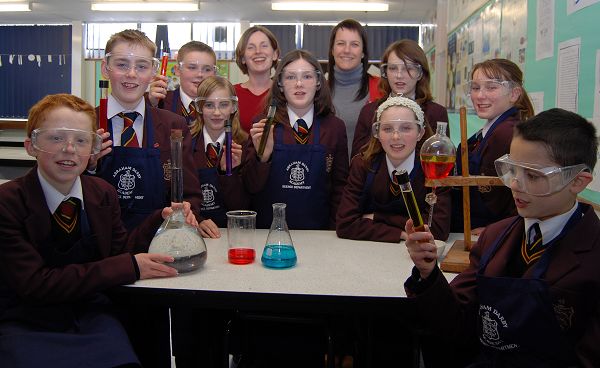 Representatives of the University College have witnessed the positive results of a recycling initiative at a second Shropshire secondary school - where recycled Harper science equipment is being put to good use.

Harper Adams teamed up with schools across Telford & Wrekin to prove that one science department’s waste can be another’s treasure.

At the end of 2008 the University College sent out word that it had lab equipment going free to good homes, and several schools jumped at the chance to stock up their stores.

Two members of staff from the University College have been visiting schools to see how they have benefited. Their latest visited was to the Abraham Derby Academy, where Head of Science Luke Davies said he was grateful to have received a large amount of glassware

He said: “We have done a lot of work since we became an academy to improve science and make it a much more creative curriculum. We have increased the number of practical lessons the pupils are doing and we have also changed the curriculum to offer BTECs as well as traditional GCSEs and with A-Level sciences coming on-stream this year, we needed to be better equipped.”

Victoria Talbot, Laboratories Manager at Harper Adams, explained that she and her staff had to have a clear-out before taking delivery of new storage containers.

“Some of this equipment has been recycled for a second time, because a great deal of it came from other universities, which were getting rid of it and said we could take all or nothing. Some of it has never even been used at Harper. Other items were no longer in use due to changes in the way we work. It’s great to see that it can now be put to good use,” she said.

Karen Hughes, the University College’s Waste Management Officer, added: “Harper Adams is committed to recycling, and we could not see this equipment going to waste. We are always keen to work with the local community, and it has been a joy to see school pupils with a passion for science putting the equipment to good use.”