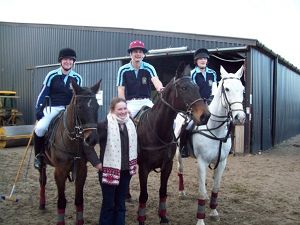 They also won the NFU cup for the agricultural college challenge and gave away only one goal in the whole tournament.  The team comprised final year student Oliver James and first years Sarah Johnson and Rebecca Lewis.

Harper Adams Polo Captain Nicky Burrows said: “The National Indoor Polo Championships may have possibly been one of the most stressful moments of my life!  I had always thought our beginner team would have a strong chance when we had 21 new members join in September.

“As I watched their first match I knew that this was the most important one to Harper Adams as a University and they did me proud, beating the Royal Agricultural College 3-0.
“The next match was the final for the NFU Agricultural Colleges Challenge – and we screamed Harper to a 5-0 win over Berkshire Agricultural College. Phil Baker, one of our coaches, commentated and as a Harper old boy, I think we know whose side he was on!

“We had a one day break after this and returned to the action on Sunday in the semi-final, beating the Royal Veterinary College 2-1.  We then had to wait seven hours until the final.
“As we all walked to the sidelines to cheer I realised how far we had come, and when the first goal can in 30 seconds I knew that they could really do this.

"After beating Bristol University 4-0 it was all over. Everyone was cheering and hugging and generally euphoric.  We praised the horses and riders as they tried mounted cuddles and ,I’m not going to lie, I was close to tears.  I would like to congratulate them on their fantastic win and to say how unbelievably proud I am of them.

“We are, as Mike Hobday, the organiser of the event said, “a small University in the middle of nowhere who one year just decided to play polo,” and lets just say, I’m very glad we did.

Club secretary Christine McDowell added: “The results from the weekend are fantastic! I’m so proud of the team.  They have kicked off the season in style being crowned National Champs in their first tournament! Becca, Oli and Sarah are good team players, who were encouraged by Harper supporters at the sidelines.

“We’d like to day thank you to Rugby Polo Club for providing ponies, and training the club every week.  I would also like to say thank you to "pallets4u.co.uk" for their generous sponsorship.”