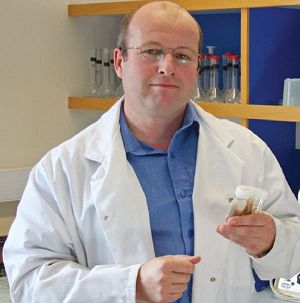 Just behind the doors of an inconspicuous building at Harper Adams University College, a team of lab-coat clad researchers are doing vital work fighting a potato pest using very clever natural science. Oliver Cartwright, from NFU West Midlands, went to the college to speak with them about their work and to find out why they are also supporting the NFU’s Why Science Matters campaign.

Scientists at a Shropshire university college are taking the fight to a resilient potato roundworm which is costing the industry millions of pounds every year.

Dr Pat Haydock, Dr Matthew Back and PhD students who work in the laboratory at the Edgmond-based college’s Crop and Environment ResearchCentre, CERC, are looking at how a natural gas produced by mustard plants can put a serious dent in the nematode population.

The potato cyst nematode, PCN, is a huge problem for farmers as it damages roots causing the plant to be smaller in size and produce smaller, lower yielding potatoes. Harper scientists have previously conducted successful trials to kill off the pest using a naturally occurring fungus but their latest project, costing more than £35,000, is looking at another clever way of taking the fight to the nematode through natural bio-fumigation.

The most recent survey showed nematodes are in more than two thirds of all potato land and Dr Haydock, reader in nematology and leader of the entomology research group at CERC, said the work they were doing was vital to help combat the pest.

He said: “We have a new project trying to deal with potato cyst nematodes and this involves bio-fumigation. We have teamed up with Agrovista Ltd and Plant Solutions Ltd, who have been working for many years to breed mustard plants which have high levels of glucosinolate which is naturally present in brassica plants.This chemical is naturally occurring and when the plant is broken up an enzyme is released which helps to create this fumigating gas.”

CERC is research and development based with its focus on crop and field trials, post and undergraduate projects and sustainable scientific solutions for the farming industry. NFU members are also on board to help and currently four local potato growers have planted mustard crops to help with the new research.

Mustard plants were sown in September 2008 and these will be grown until the summer when they will be chopped up, ploughed into the soil and then rolled in the hope the gas will be produced underground to kill the nematodes.

Dr Haydock said: “As the mustard crop is over wintered this will also reduce nitrogen leeching, cut down on soil erosion and improve the organic content matter of the soil. The gas which is produced is the same that is available as a commercial fumigant but we are trying to take a more holistic view of the whole process with the additional benefit that mustard brings.

“Research costs money to undertake and the Potato Council has given us a grant of £7,000 to cover basic laboratory assessments. In-kind support has also been provided by local agronomists Andrew Wade and Luke Hardy from Agrovista and Shropshire farmers Robert and Tim Belcher, Neil Furniss and Mark Davis who have each given up three to five hectares of land for the study.

“This industry-driven collaborative approach has allowed us to keep costs to a minimum.” The team will monitor what is going on in treated and untreated areas, look at soil samples to assess the nematode population before and after, assess the potato crop and monitor the fumigant’s effect on other diseases and pests.

The research is also extremely important due to EU changes in pesticide regulations and the Harper scientists said that alternative, natural methods of killing pests and diseases were urgently required as the industry faces restrictions.

Dr Haydock added: “There is never going to be a magic bullet to control PCN but the industry needs as many different types of ammunition in its arsenal as possible.“Bio-fumigation is one more potential weapon to be used alongside crop rotation and more resistant plants which can all be integrated together against pest populations.”

The work being done at Harper Adams is also central to the message behind the NFU’s Why Science Matters campaign which was launched last year. The campaign aims to get the Government to reverse under-spending for research and development in agricultural science.

The NFU is keen to put production and food security at the top of the political agenda for agricultural research and farmers and scientists from across the West Midlands have been backing the campaign.

An NFU report has shown there has been a 45 per cent drop in funding research and development in agriculture which has resulted in a stagnation of national productivity.

Dr Haydock said: “The Why Science Matters Campaign is something that has to be supported. “Funding is needed in all areas of scientific research but particularly on the arable side which has suffered repeated cuts in funding budgets. I feel that it is harder to get funding from Defra as its budget has shrunk and money has been diverted elsewhere.

“During 2008 we saw more people thinking about food security and we have to remember that we are still a densely populated island nation, with a limited amount of arable land and we need to be able to feed ourselves.

“We must invest and there needs to be a greater emphasis on production agriculture. Environmental issues are important but we need efficient, sustainable food production and more investment from the Government in the science that underpins these systems.”

Mr Kidney was there with leaders in science and agriculture in his role as chairman of the All Party Group on Science and Technology in Agriculture.

David Collier, West Midlands NFU director, said he was very pleased with the support from  the MP, industry decision makers, scientists and farmers and hoped the Government would pay attention to what was being said.

He added: “Much greater emphasis needs to be placed on investment in research and development for agricultural science. The UK government has a crucial role to play at both a regional, national and globallevel and we are calling for a halt to the budget cuts of recent years.

“Our farmers are squaring up to the challenges that climate change, food security and other important issues present and we want to see key decision makers backing the industry to help those working on important scientific research to meet today’s challenges and those of the future.”

For further details about the Why Science Matters campaign go to www.whyfarmingmatters.co.uk