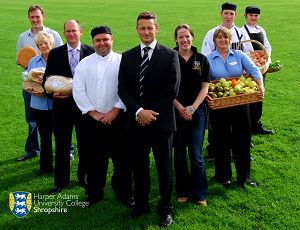 The man responsible for feeding staff, students and guests at Harper Adams University College has been short-listed for a second national award, thanks to his innovative farm-to-fork approach.

The Catering Department at Harper Adams has already conquered the university sector, winning the Outstanding Contribution to Sustainable Development honour at the Times Higher Education Awards in October.

Now General Catering Manager David Nuttall will line up next to some of the country’s top food specialists at the Cost Sector Catering Awards, having been short-listed in the University/College category. He faces competition from two much larger institutions: The University of York and Imperial College, London.

He said: “Being short-listed for this catering industry award is a huge honour and one which makes me very proud of all the team. Reducing food miles to food metres at Harper Adams has become easy because of the great enthusiasm from staff and customers alike. I’m grateful to them all for their support.”

Mr Nuttall was the primary instigator and a driving force behind an entirely new approach to catering at Harper Adams, which has cut costs, reduced the University College’s carbon footprint, improved the quality of menus, improved customer satisfaction and attracted new business.

David came to Harper in late 2005, with nine years’ experience of catering within Higher Education institutions. But rather than work within the regimes he was familiar with, David sought to work with all that Harper Adams had to offer – specifically its own on-campus 343-hectare farm and burgeoning expertise (as well as a clear thirst for) sustainable development.

Working closely with his Head Chef Wayne Wright, and supported by colleagues across the specialist land-based University College, David brought more and more home-produced ingredients, including pork, lamb, eggs and herbs, into the college kitchens.

Where food could not be supplied from the farm, he set about sourcing it close to home, such that few fresh ingredients travel more than 20 miles for inclusion in the 2,000-plus meals served each day to staff, students, visitors and conference guests at peak times.

The peer-judged CSC awards, being presented at the Hilton London Metropole on April 16, are hailed as “the pivotal point of the foodservice calendar”.