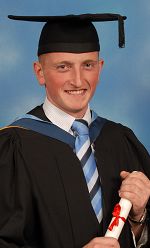 A dairy cattle research project conducted by a Harper Adams University College graduate is being presented to the annual meeting of the British Society of Animal Sciences.

For his final year research project Cathal, working with Harper Adams reader Dr Liam Sinclair, investigated “The effect of a short extended grazing period in the spring and straw allocation on the milk yield and composition of autumn calving dairy cows”.

The Dromore man, who attended Greenmount College before commencing his degree studies in Shropshire, worked with 36 Holstein-Fresian Diary Cows, all approximately 180 days into lactation. He controlled their straw and grazing intake through the use of three different dietary treatments:

The investigation lasted for a period of three weeks during March last year. All of the animals were housed together, their milk yield was recorded at each milking and samples were taken for subsequent analysis during week 0, mid way through the study and at the end of week 3. Body weight and condition score were measured at the beginning and end of the study.

Cathal’s results have shown that access to grazing had no effect on milk yield or composition in the autumn calving cows, however it did reduce their intake of the TMR considerably. The cows offered the TMR+straw ration consumed 30% less of their TMR ration than cows on treatment 3.

He said: “As there was no difference in production or condition score change, the trial illustrates that the cows appeared to consume 30% of their dry matter intakes from grass. This greatly increased profit as it reduced the amount of concentrates, maize and grass silage fed and made use of the cheapest available feed: high quality spring grass.”

The inclusion of straw in the cows’ diet showed no effect on milk fat content, possibly owing to the high fibre content of both the TMR diet fed and grazed grass available. None of the factors investigated had an effect of weight or body condition.

“This trial was a fantastic learning experience for me and I am glad that it is now being taken to a wider audience. It is very important that farmers assess extending the grazing season and the huge benefits it can bring to their farming enterprise.”

“There is a misconception with many high and low input dairy farmers that turning the dairy herd out to grass early in spring, even for only two hours per day, will reduce production. What I have shown here, in fact, is that production can be maintained and produced at a lower cost.

“This is crucial in today’s dairy industry as the milk price has suffered considerably and farmers must assess options that would enable cheaper milk production, such as this study has illustrated. A longer trial would have been a great opportunity to assess lameness of grazing cows in comparison to cows housed indoors.

“Also, an extended trial may have also highlighted benefits of straw inclusion in the TMR diet during the second grazing rotation as the younger, leafier spring grass may have had a lower fibre content and straw may have been beneficial. Perhaps a student could continue this trial next year!

Cathal is now working on a New Zealand-owned and run grass-based dairy farm in Missouri, USA. “We are milking 500 crossbred dairy cows on the farm I am on, although Grasslands, the company I am working for, has 12 farms here, each with 500 cows - a total of 6,000. I started here in January and will be here until July, I will then return home to pursue a career within the UK and Irish dairy industries.”