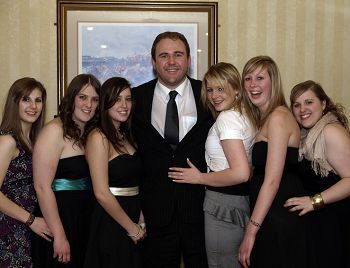 Rugby legend Scott Quinnell was guest of honour and main speaker at the annual dinner of the Welsh student society at Harper Adams University College.

Harper Cymru is the association for Welsh students who are studying at the UK’s top University College. More than 100 guests attended the club’s annual dinner, held in The Tern Hall Hotel, Shropshire, and enjoyed an amusing and inspiring talk from the former Welsh international player.

Scott told the students many entertaining tales of his life and adventures. His whole life and family are inextricably linked with rugby and he can claim a ‘Who’s Who’ of legendary names amongst his relatives, god parents, friends and associates in the world of rugby.

However, he struck a chord with the students when he spoke of his personal problem to overcome dyslexia and in the value he attached to getting a good education. He encouraging his audience to seize the opportunity they had been given to study at such a prestigious university institution as Harper Adams. Later in the evening Scott mixed with the students and chatted to them informally.

“It was wonderful to have Scott with us at our annual dinner,” said outgoing Harper Cymru President, Bethan Watkins, who is studying Agri-Food Marketing with Business Studies. “This has been a great year for the Society and this year’s dinner has ended the year on the best possible note.

“I wish all success to the new executive and trust that Harper Cymru will continue to grow and prosper as more and more Welsh students chose to study here at Harper,” added Bethan, 20, from Llanfynydd, Carmarthen.

Outgoing Harper Cymru secretary Anna Bletcher, from Buckley, Flintshire and on the same course as Bethan, said: “It was a great night. We worked really hard to plan it and it all paid off. Nothing went wrong and everyone enjoyed themselves. Scott was brilliant – really funny to listen to and an all round nice guy. We’d like to thank him for coming along and helping to make the night so special.

“Thanks also go to the National Sheep Association, which sponsored this year’s club tops. A couple of NSA representatives also came along to the dinner, so we were able to show our gratitude in person.”

Two awards were made at the dinner. Claire Bagshaw 21, Rhydargaeau, from Carmathenshire, won the Member of the Year Prize for her support of the club.

And representatives of Harper Cymry, the association for Welsh Harper Adams alumni, announced the winner of the 2009 Harper Cymry/ Royal Welsh Agricultural Society student award. The honour goes to Owain Harries, a third year BSc Agriculture with Animal Science student, who is currently doing his industrial placement year with Genus ABS, but rejoined Harper colleagues at the dinner.

Owain, 21, from Llanelli, Carmarthenshire, is the first non final-year student to have won since the award was set up in 1999. Owain was also Strutt & Parker's Young Country person of the year in 2006 and RABDF Young Dairy Stock Judge of the year in 2005.

Julie Brook, Harper Adams Alumni Officer, said: “Unlike the early days of the award, when nearly all applicants were final year students, more recently we have been pleased to receive applications from all years and yet again we were very impressed with the calibre of the candidates. All the candidates acquitted themselves well in interview and it is interesting to see how students develop in knowledge, maturity and confidence.”

The judging panel sees the award as an opportunity not only to showcase Harper Adams students at the Royal Welsh Agricultural Society show but also for students to gain experience in submitting applications and interview practice.  The award will be presented at the RWAS awards ceremony at the Royal Welsh Show in July.