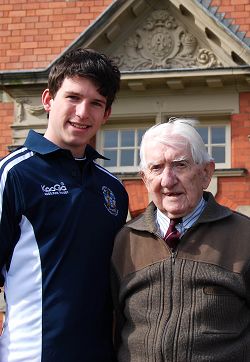 Harper Adams University College has welcomed back a former student - 75 years after he completed his studies.

Mr Cyril Rees MBE, 95, from Llandovery, Dyfed, is the grandfather of current Harper Adams student Carwyn Rees, 19, and recently visited the Shropshire campus with his daughter-in-law, Elizabeth, who is Carwyn’s mother.

During his visit, Mr Rees dropped in to see current Harper Adams Principal Professor Wynne Jones, to congratulate him on receiving an OBE in the 2009 New Year Honours.

Mr Rees did the Agricultural Certificate course at Harper Adams from 1933 to 1934. His father had also studied at the Edgmond college, in 1909. John Cyril Rees died in action in the First World War and is remembered on a memorial in the Harper Adams Committee Room.

Mr Rees said: “Back in the 30s, the college was nothing as big as it is now. Dr [Charles] Crowther was principal in my time. I had come straight from Christ College Brecon to board here and I was captain of the rugby and cricket teams.

“When I left Harper, I took up an apprenticeship with a firm of auctioneers in Brecon, and then I became a qualified estate agent and took up a post as Chief of Sales with Bob Parry and Co in Caernarvon. I was there for four years before I was called up to join the Army.

“I was with the 42nd Tank Regiment. I was in charge of a tank regiment but thanks to a shrapnel wound I was discharged.”

Mr Rees had been in the Army for three years and returned immediately to Wales. He ran a dairy farm in Llandovery and worked part-time for the Milk Marketing Board. He and his wife, Margaret, eventually started a milk round and, to further diversify, in the late 1950s they set up what is now the thriving five-star Erwlon Caravan and Camping Park.

Mr Rees later served as a magistrate and as Mayor of Llandovery, and was awarded the MBE a decade ago – leaving rather big footsteps for his grandson to follow in!

Carwyn is a first year student, working towards a degree in rural enterprise and land management. Echoing his grandfather’s first career move, Carwyn hopes to become an auctioneer and he is already showing he’s got what it takes. Having won through local heats, Carwyn will be competing against other young auctioneers at a national contest in London this summer.

The former pupil of Ysgol Gyfun Pantycelyn, Llandovery, seems to have also inherited his grandfather’s talent for leadership, taking on the post of Harper Forum Chairman for 2009/10. And while he’s back at home he helps the rest of the Rees family, including dad Huw, with the running of the farm and caravan park.