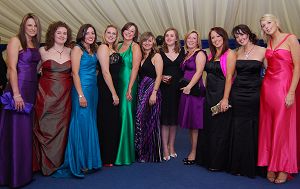 Harper Adams brought back the good times last week with the return of course dinners after a five year absence. And the week of celebrations concluded with the traditional final year dinner on Saturday night.

At the first event, students from the animal-related and engineering courses at Harper Adams united under a safari theme. Their guest speaker was young farmer Richard Bowdler and during the course of the evening a special presentation was made to lecturer Margaret Parry, as she prepares to enter semi-retirement.

The next night it was the turn of the Rural Enterprise and Land Management (REALM) and countryside, environment, leisure and tourism (CELT) students, who enjoyed a Mad Hatter’s Tea Party – complete with a stunning array of headgear. Their guest speaker was Jeremy Moody, from the Central Association of Agricultural Valuers.

A couple of days later – and unfortunately after the weather had turned – it was time for the agriculture and business courses students to celebrate and “Spring back the good times”, with special guest Peter Kendall, President of the National Farmers’ Union.

Dinner organising committee chairman Chris Manley, a final year agriculture student, said: "We wanted to make sure the dinners were reintroduced properly, so we sought out a high-calibre speaker, and who better than the head of our nation's Farmers' Union.

"We were delighted that Peter was able to join us on the night. We are also grateful to have received a high level of support from businesses within the industry.”

The dinners were sponsored by Velcourt, AB Agri, Uncle Henry's Farm Shop and Noble Foods, which all sent along representatives to celebrate with the students and Harper Adams staff. In addition, there was a wide range of table sponsors, and businesses that donated auction prizes.

Chris added: "At the agriculture and business courses dinner we ran an auction in aid of the Royal Agricultural Benevolent Institution (RABI) and MacMillan, which was very well supported and raised about £1200.”

On Saturday, Francis Fulford did the honours at the final year dinner, which was an Oscars night with a Hollywood theme and plenty of awards. This event was chance for those due to graduate in September to celebrate the successes of the year alongside teaching and support staff. A bottle of whisky was presented to Harper Principal Prof Wynne Jones for his dedication to the students during their time at the University College.

The reintroduction of the course dinners was masterminded by Final Year Reps Paul White and Debbie Williams. They organised the set-up for all four dinners: a marquee, from Four Seasons Marquee Hire, and the catering, by Dinner By Design which, in keeping with the student’s request for provenance, dished up Tamworth Packington Pork at the course dinners and slow-roasted Hereford beef at the final year dinner.

With the foundations in place, it was left to committees from the relevant course areas to plan and arrange the finer details – and they all went to town with their themes, leading to four incredibly successful celebrations on the Harper campus. Here’s to next year!